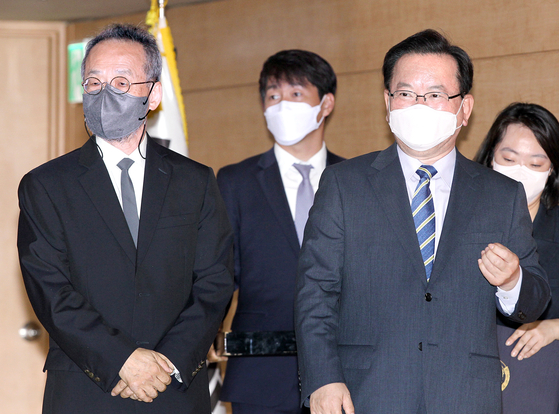 
The government launched a new government-private sector committee to draw up a roadmap for the post-pandemic transition to normalcy by the end of this month.

“We are preparing to treat Covid-19 as a controllable infectious disease, and return citizens to their daily lives,” Prime Minister Kim Boo-kyum said during the inaugural meeting of the committee Wednesday.

“We’re not saying people should take off their masks right away,” Kim added. “We will regain our daily lives gradually as if we were crossing the river by feeling the stones.”

The meeting was jointly chaired by Kim and Choe Jae-chun, distinguished professor of EcoScience at Ewha Womans University. The committee consists of 40 government officials and outside experts, divided into four subcommittees covering the economy and public welfare, society and culture, administration and safety, and quarantine and healthcare.

During the meeting, Kim mentioned introducing a “vaccine pass” system, or a Covid health pass system similar to those used overseas, which could be used to allow fully vaccinated people access to restaurants and bars, while an unvaccinated person might have to present a recent negative PCR test result.

The committee suggested that the recovery should be attained “step-by-step and gradually."

The committee plans to canvass public opinion through its four subcommittees and prepare a roadmap for the gradual transition to normal life by the end of this month. Health authorities had predicted that Korea could start introducing “With Corona” policies as early as Nov. 9.

The committee will continue to hold meetings once or twice a month even after the country transitions into “With Corona” policies.

While the final social distancing adjustments before Korea shifts into the new "With Corona" strategies are to be announced this Friday, heath authorities said they will mainly be eased restrictions for those who have been fully vaccinated.

A senior epidemiological strategist at the Central Disaster Management Headquarters Son Young-rae hinted that the authorities are “mainly reviewing the expansion of incentives for fully vaccinated people.”

During a With Corona Task Force meeting at the National Assembly on Wednesday, the ruling Democratic Party (DP) proposed the introduction of a “temporary vaccine pass”, which includes a measure of extending the business hours of restaurants and bars from 10 p.m. to midnight, but only for fully vaccinated patrons.

“The government is in a position that they need to review whether they will adopt [such a vaccine pass system] in the new social distancing system to be applied from next Monday,” DP spokesperson Rep. Shin Hyun-young told reporters after the meeting.

Meanwhile, as cases of breakthrough infections among people who received the one-dose Janssen vaccine continue to be reported in the country, health authorities announced that they will offer booster shots to the Janssen recipients.

Janssen recipients are eligible to get an additional vaccine six to eight months after their original shot, and the authorities said they are planning to provide a booster with an mRNA-based vaccine — Pfizer or Moderna.

“Booster shots of the vaccine are being considered seriously in light of recent research showing evidence that additional vaccination is possible,” said Hong Jeong-ik, head of vaccine distribution planning at the Korea Disease Control and Prevention Agency (KDCA) in a press briefing Wednesday, adding that health authorities will announce the type of boosters after discussions with experts. 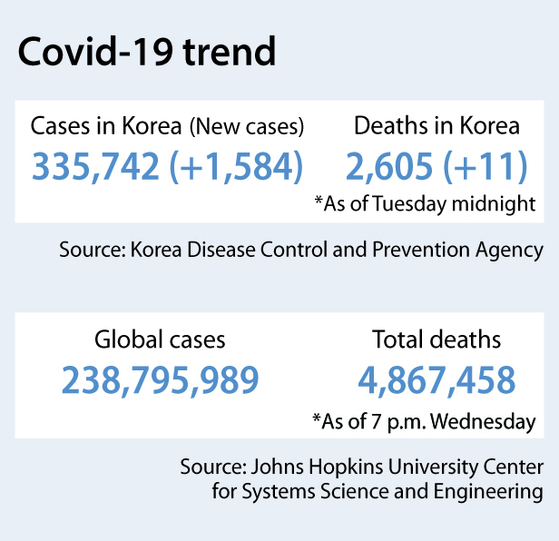 On Wednesday, the country reported 1,584 new Covid cases, including 1,571 local infections, raising the total caseload to 335,742. Eleven more deaths were added, raising the death toll to 2,605.