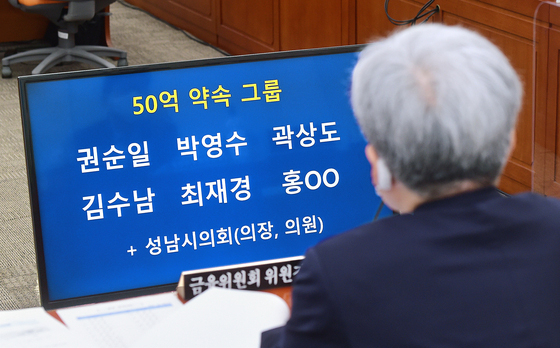 An opposition lawmaker disclosed a list of members of the “5 Billion Won Club” involved in the lucrative land development project. [LIM HYUN-DONG]

The author is a national news editor of the JoongAng Ilbo.


“To support my declining memory, I could not help opening a separate office for my brain.”

Poet and English literature scholar Lee Ha-yun explained why he takes notes. Middle-aged Koreans are familiar with his essay titled “Memo Mania” as it is included in high school textbooks. While not many like memos as much as Lee, humans are animals that leave records by nature. As Lee explained, memories are limited. Humans are called “Homo Scriptus.”

The number of traditional memo maniacs who write on paper with pencils are decreasing, but the amount of recording online has increased. Young people constantly record every little bit of their life.

But professional recorders are on the next level. While records are not to be made public, they meticulously record what was given to whom and when. They use the records as a threat when compensation is demanded or when things go wrong.

The moment when this recording, that was born and raised in the dark, sees the light of the day, the world is shaken. The “lists” with the names of suspects started to show their massive impact at the turn of the century. Whenever the lists with modifiers like Jung Hyun-jun, Jin Seung-hyun, Lee Yong-ho and Seong Wan-jong emerged, bloodshed occurred in politics and the government.

But the quality of the lists varied drastically. Some had stunningly high quality while others were mere holiday gift lists. Another was just a bundle of paper that was made by putting together a few information leaflets on the market. Sometimes, different editions of lists appeared at the same time and obstructed the investigation.

The list in the Daejang-dong development scandal is unusually called the “5 Billion Won List.” (The same amount was allegedly delivered to each of the multiple people in return for favors.) In the naming, it created a new method in the field as it does not start with the name of a key suspect.