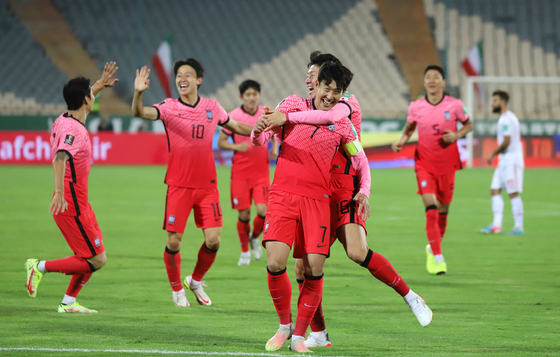 The Korean team celebrates after Son Heung-min, center, scores the opening goal for Korea in the 48th minute of a game against Iran at Azadi Stadium in Tehran, Iran on Tuesday. [YONHAP]


The Korean national football team held Iran to a 1-1 draw at Azadi Stadium in Tehran on Tuesday, walking away with one point from what was set to be the most challenging matchup of the third round of qualifiers for the 2022 Qatar World Cup.

A draw with long-term rival Iran is not a bad result, but it could have been so much more. Son Heung-min came through for the Taeguk Warriors for the second night in a row in the 48th minute, only for Korea to blow that lead in the 76th minute and settle for a 1-1 finish.

With the draw, Iran remains on top of Group A with three wins and a draw, followed by Korea with two wins and two draws.

The draw does little to break Korea's decade-long dry spell against Iran. The Taeguk Warriors last beat Iran in the quarterfinals of the 2011 Asian Cup. Since then, Iran has gotten the edge on Korea four times and the two sides have drawn three times.

Korea has also never beaten Iran at home in Tehran — another statistic that was reinforced on Tuesday. In eight games played in the Iranian capital, Korea has lost five and drawn three.

An entirely European-based front line should have given Korea some real firepower, with Bordeaux's Hwang Ui-jo brought up front and Tottenham Hotspur's Son, Mainz's Lee Jae-sung and Wolverhampton Wanderer's Hwang Hee-chan in support.

Jung Woo-young of Qatari side Al Sadd and Hwang In-beom of Rubin Kazan added to the international contingent in midfield, alongside defenders Kim Min-jae of Fenerbahce and Kim Young-gwon of Gamba Osaka and goalkeeper Kim Seung-gyu of Kashiwa Reysol.


In fact, defenders Hong Chul of Ulsan Hyundai and Lee Yong of Jeonbuk Hyundai Motors were the only players in the starting XI to play in Korea's K League.

Yet despite Bento's best efforts and the undeniable calibre of the individual players, Korea once again got off to a slow start.

The lack of offensive cohesion that has plagued the national team for years was clearly still an issue in Tehran, with Korea managing to get eight shots off in the scoreless first half, but not a single one on target. Iran played a tight lockdown defense, an approach with every Group A side has found Korea clearly don't have an answer to.

A 12th minute Lee Jae-sung header that sailed over the bar was Korea's best chance for the half, while only some fast thinking from Kim Seung-gyu stopped Iran pulling ahead in the 43rd minute. 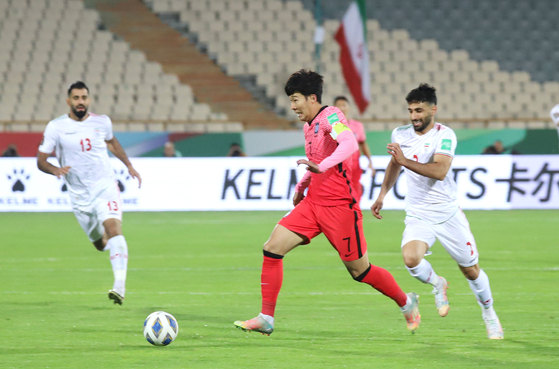 Son Heung-min scores the opening goal for Korea in the 48th minute of a game against Iran at Azadi Stadium in Tehran, Iran on Tuesday. [YONHAP]


Son broke the ice in the 48th minute, picking up a well-placed long pass from Lee Jae-sung to get behind the defense and slot the ball just past the Iranian keeper to take the score to 1-0.

Iran went on the offensive, hitting the post in the 67th minute before finally finding the back of the net in the 76th minute. The goal, a long header from the back of the box, caught the Korean defense on the back foot, passing three separate defenders before beating Kim Seung-gyu.

Korea had one last chance to pull ahead two minutes into stoppage time, when substitute Na Sang-ho of FC Seoul picked up a loose ball in front of the goal but failed to beat the Iranian keeper.

The 1-1 draw leaves Korea looking strong in second place with six games left to play. As the top two teams advance to the Qatar World Cup, both Korea and Iran remain in a strong position.

Korea will next take on the United Arab Emirates on Nov. 11, and then begin the second-leg fixtures against Iraq on Nov. 16.