The 2050 Carbon Neutrality Commission is in the hottest of hot seats. Its job is to come up with ways that Korea will achieve net zero carbon emissions by 2050.

The commission is only five months old. In August, it described three pathways to 2050 with the most radical suggesting the country completely ditch fossil fuels and expand energy generation from renewable sources to 70.8 percent from its current 6.6 percent.

Business groups said the plans were unrealistic and asked too much of them. Environmental groups argued equally loudly that the targets were too modest considering the massive impact climate change will have on the entire human race.

Yun Sun-jin, co-chair of the presidential body with Prime Minister Kim Boo-kyum and a professor at the Graduate School of Environmental Studies at Seoul National University, says one thing is indisputable: that "achieving carbon neutrality is the duty of this generation" and cutting emissions and expanding the use of renewable energy is the path that must be taken.

"Some seem to think [our plans] are not realistic, but I have a very different understanding of what is realistic," Yun said in an interview with the Korea JoongAng Daily at the commission's office in Jongno District, central Seoul, in September. "The climate crisis is 'the reality' and it's only natural that we pursue a drastic transition in our energy mix to prevent the worst from happening."

Environmental groups want Korea's emissions reduction target for 2030 to be at least 50 percent. Yun said, she would like to do that, but Korea's in a difficult position.

"Cutting half of the country's emissions in less than a decade is a harsh target," Yun said.

Yun believes the forming of the commission, despite the inevitable controversies over its decisions, will bring the country a step forward in the global race to achieve carbon neutrality.

"Our task is not only a matter of what percentage we are reducing emissions by," she said. "We should think of ways to embrace as many people as possible on the way to carbon neutrality. And all members of the society should communicate on how to do that."

The following are the edited excerpts of an interview with Yun. 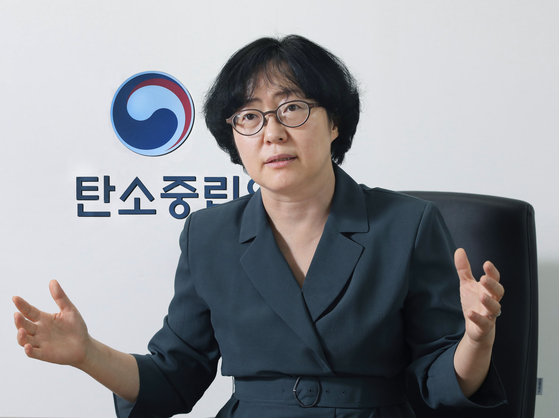 Yun Sun-jin, co-chair of the 2050 Carbon Neutrality Commission, speaks during an interview with the Korea JoongAng Daily on Sept. 30 at the commission's office in Jongno District, central Seoul. [PARK SANG-MOON]

Q. What exactly is carbon neutrality? Some still seem to be confused.

You may easily think of it as creating a balance between carbon emissions and carbon absorption through carbon sinks [anything that absorbs more carbon from the atmosphere than it releases, like forests]. However, it's wrong to think there can be as much carbon emissions as long as they can be absorbed because absorbing emissions is much too costly.

To achieve carbon neutrality, ideally, we must try to make carbon emissions near zero, though it is impossible to make them completely zero. That's when we try to absorb carbon through forest carbon sinks and technologies like carbon capture, utilization and storage (CCUS).


Q. There's much controversy about your three proposals in August because two of the three proposals projected there would still be a net surplus of carbon emissions in 2050.

All three proposals target carbon neutrality, but there was controversy because people had a different idea about the role of our proposed scenarios.

We are expecting seven coal-fired power plants to still operate in Korea in 2050 if we don't force them to close by some legal measures.

The scenarios were meant to show that unless we make a drastic change in our lifestyle and energy mix, it is difficult to achieve carbon neutrality domestically. Even the first two scenarios offset emissions through carbon sinks overseas and technologies in development like CCUS.

But, of course, it's best to reduce dependence on CCUS as it is uncertain whether the technology will be ready for commercialization and whether it will be economical.


Q. What have you been focusing on since you announced the scenarios in August?

We have been listening to various stakeholders including businesses, civic groups, labor unions and farmers for feedback.

We also formed a group of 500 citizen representatives randomly selected to evenly represent age groups, sexes and regions. We educated them on climate issues and why we need to achieve carbon neutrality through various methods including online videos, lectures, and group discussion sessions over the last couple of months.

We made them participate in surveys at four different times, to see whether the education had any effect on their views on climate issues and to collect as much feedback as possible.

Ordinary people realized through the education that we also need to consider job security of the workers at those coal-fired power plants we want to close.

We learned in the process that our society still has a long way to go to reach a consensus on pathways to carbon neutrality and we need to effectively tackle issues that the people feel are crucial to achieving carbon neutrality, such as making a legal framework to offer compensation for workers at coal-fired power plants.


Q. It feels like reducing dependence on fossil fuels is crucial to achieving the government's carbon neutrality target. What measures are being taken to shift the energy mix?

Korea is a democratic nation. There is no way for the country to force operators of coal-fired power plants that have lawfully obtained their licenses to suddenly stop operating.

This year, a coal-fired plant in Seocheon started operating. This will still be operating beyond 2050 on the assumption that it runs its designed life span of 30 years. This is a very sad reality from my point of view. But most of these plants were endorsed under the Lee Myung-bak administration.

A nationwide blackout caused in 2011 raised the need for the country to secure a stable supply of electricity in that administration.

We need to come up with a system to offer compensation for the workers [to close down power plants.]


Q. Some argue such a drastic energy transition is unrealistic.

I think they are being unrealistic. The reality is that we need to increase dependence on renewable energy. The world is moving in that direction.

If you think about it, people didn't expect smartphones to be so widely used in the past. Technology has evolved so fast that people are each carrying computers and televisions in their hands now.

Depending on how seriously people take the climate crisis as a reality, our future can be reshaped.


Q. What are your thoughts on the government's push to phase-out nuclear energy?

The reality is that the world is cutting coal and nuclear energy and expanding renewable energy.

Nuclear energy or fossil fuels are not the cheapest energy sources anymore. It actually depends on what you consider as a cost. The cost should not only include the actual cost incurred in generating power. For nuclear energy, we should look into how much technological investment has been made to keep nuclear plants safe. How much cost is needed to handle radioactive waste from the plants. There are costs that we have not paid for, which is why we are facing such serious climate risks.


Q. Some argue for a more dramatic emissions reduction and energy transition targets.

When I meet with ambassadors to Korea, they say Korea needs to raise the 2030 emissions reduction target to at least 50 percent from the country's peak in 2018. Then I tell them it'd be nice to cut emissions by 50 percent but 2030 is less than a decade away.

Korea differs from other developed countries in many ways.

Other developed countries including countries in Europe, the United States and Japan have been Annex B countries, which are signatory nations to the Kyoto Protocol, and are subject to reduction targets on their greenhouse gas emissions. The Kyoto Protocol [only binds developed countries, and places a heavier burden on them because it recognizes that they are largely responsible for the current high levels of greenhouse gas emissions in the atmosphere.]

When the protocol was adopted in 1997, that was just a year after Korea became a member of the OECD and also when the country was facing the Asian financial crisis. Korea was still considered a developing country less responsible for emissions and thus wasn't obliged to set reduction targets under the protocol.

Unlike most developed countries that hit emissions peaks in the 1990s, Korea's peak was in 2018. Compared to others, we have a very short time until 2030 to reduce emissions from our peak level.

Korea's economy is also heavily dependent on manufacturing. That industry accounts for some 28 percent of the country's economy.

Among OECD countries, Germany and Japan have relatively high dependence on manufacturing, but still their industries account for just a little over 20 percent of their economies.

For manufacturers to make their business processes greener, they have to replace all their facilities, which involves heavy costs. Technologies like hydrogen-based steelmaking is not even ready for commercialization, which makes it more difficult for them to cut emissions right away.

So there are a lot of factors to be considered [before further raising our targets.]


Q. The presidential commission is preparing to announce its final proposal at the end of this month.

It is called the "final" proposal but it's only a final version developed from where we stand now. It is stipulated in law that the scenarios must be reviewed every five years. Even before five years, if there is a critical change in the speed of climate change or a breakthrough in technology development, our scenario can be updated.

Also, while our target year for carbon neutrality is currently 2050, that can also be advanced to 2040 or 2045 depending on the progress in climate change.


Q. What do you think is the most important factor in Korea achieving carbon neutrality by 2050?

The people of Korea hold the key. They must care enough about climate issues to be able to change politicians. They need to support politicians who have made even a half step further than others in tackling climate change. The same goes for companies. They should buy products made by companies being environmentally responsible and make those who are not being responsible wake up to reality.

Citizens themselves should also be producers of energy. They can install solar panels on their balconies or invest in funds that invest in renewable energy projects. They can also produce energy by simply saving energy. Not using energy is also a way of producing energy.

I personally think presidential candidates should make climate-related pledges their top priority. Our lifestyles should be completely reshaped to be able to achieve carbon neutrality.

Even now, a lot of people agree that carbon neutrality should be achieved but are still reluctant to give up their comforts to tackle climate change.

People must be willing to pay for change.