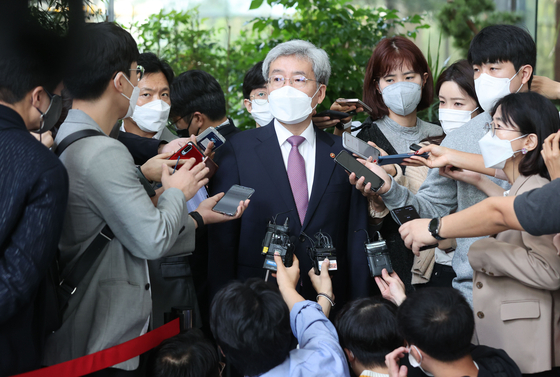 
Legitimate borrowers will not be turned down for jeonse loans, according to Financial Services Commission Chairman Koh Seung-beom.

“We plan to handle jeonse loans in the fourth quarter flexibly so that the supply of such loans won’t be cut off,” Koh said.

The FSC chair said this may even include the government allowing banks to go over lending limits as long as the increase beyond the established caps are for joense lending.

Banks have been advised by the government limit the increase in loans outstanding to 5 percent a year.

Some banks, including Nonghyup Bank, have stopped accepting applications for mortgages since last month as loan books already exceed the recommended level.

President Moon Jae-in weighed in on the issue. According to the Blue House on Wednesday, he ordered the financial authorities to pay special attention so that banks won’t stop offering jeonse loans to customers.

The government plans to announce measures aimed at curbing household debt, which has been expanding to record levels, next week.

Despite the Bank of Korea raising the base rate in August from 0.5 percent to 0.75 percent and the government toughening regulations on borrowing, as of September the balance of household debt at banks was 1,052.7 trillion won.

In September alone, 6.5 trillion won was borrowed from banks.

While the government over the last couple of months has been working on debt control measures, the market has started to worry about the possibility of the government tightening jeonse lending.

With it more difficult to qualify for mortgages and unsecured loans, jeonse loans were being sought to be used for other purposes.

The government expressed its concern that jeonse loans were used for purposes other than paying lump-sum deposits, including buying real estate and stock.

Finance Minister Hong Nam-ki during a press briefing in September said the government has no choice but to “squeeze” jeonse loans in the second half.

“In the first half, too many loans were approved,” Hong said. “To manage within the annual target, there is no other choice.”

The government has been warning about the rapid increase in loans and the impact on the economy.

While the central bank held rates steady earlier this week, it is likely to increase them next month as inflation pressures are building.

Most of the people aggressively borrowing are young, and the government has warned of insolvencies once interest rates are raised.

The public has started to express frustration, particularly those living in jeonse accommodations.

Jeonse prices have been rising fast. The government’s failed real estate policies and tenant protection legislation have been blamed.

The jeonse prince of an 84-square-meter apartment in Helio City last month was 1.2 billion won. A year earlier, it was 600 million won.