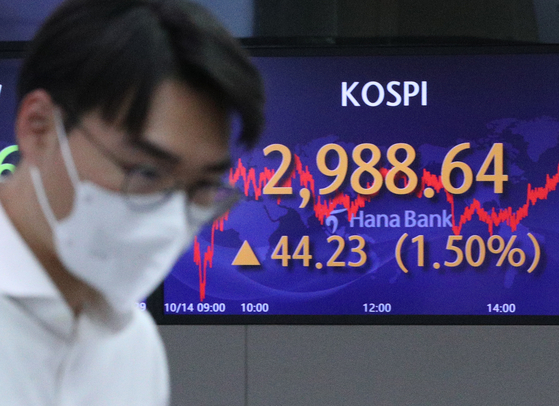 A screen in Hana Bank's trading room in central Seoul shows the Kospi closing at 2,988.64 points on Thursday, up 44.23 points, or 1.5 percent from the previous trading day. [NEWS1]


Stocks advanced for a second straight session Thursday, as investors were relieved by the stable currency rate and Washington's move to ease supply-chain disruptions. The won rose against the dollar.

Trading volume was moderate at about 607 million shares worth some 11.9 trillion won ($10 billion), with gainers outnumbering losers 745 to 130.

Stocks got off to a strong start, as the won advanced against the dollar, after depreciating sharply against the greenback over the past few days.

The local currency closed at 1,186.8 won against the dollar, down 7 won from the previous session's close.

Most large caps closed higher in Seoul, led by tech and bio gains.