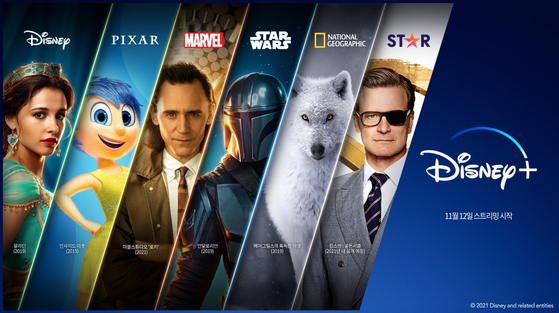 A poster for the local launch of the streaming platform Disney+ on Nov. 12 [WALT DISNEY COMPANY KOREA]


With the launch of streaming platform Disney+ into the highly competitive OTT (over-the-top) market in Korea on Nov. 12, the platform promised that it will be “investing heavily” in local language content across Asia Pacific regions.

At the press event Thursday introducing the upcoming content which will be available for streaming via Disney + as original series, Luke Kang, president of the Walt Disney Company Asia Pacific (APAC) emphasized the importance of the production of local language content in addition to the vast library of classic content that Disney+ hopes will appeal to its subscribers from Disney, Marvel, Star Wars, Pixar, National Geographic and Star. The Star brand includes television and film content targeted to mature audiences in contrast to the family or franchise-oriented programming for other brands. The content is drawn from the libraries of Disney subsidiaries such as FX, Freeform, Hulu, ABC Signature, 20th Television, Touchstone Pictures, Hollywood Pictures and more.

“With over-the-top services going mainstream, the emergence of world-class content from the Asia Pacific and rising consumer sophistication, we believe that this is the right time for us to deepen our collaboration with the region’s best content creators to deliver unparalleled storytelling to global audiences,” Kang said.

The platform did not specify exact number when it comes to investment in content, only vaguely predicting “we’ll be investing heavily in local content in this market and across the APAC region. You should see us over a few years being a significant investor, for compelling content that you will see in this market,” said Jay Trinidad, the general manager at the Walt Disney Company Direct-to-Consumer APAC.

“Disney’s philosophy is to be broadly a good citizen,” Trinidad said. “We’ve been operating as a good citizen for over 25 years. We’re interested in being a good citizen and a community member. We’ll be collaborating very closely with many partners, content production and telecom partners and local content delivery network operators in the market, because that will allow us to deliver in-class streaming experiences for our consumers.”

“Our production strategy is centered on working with the best storytellers in the region, leveraging our brand power, scale and dedication to creative excellence,” Disney’s APAC Head of Content & Development Jessica Kam-Engle said. “We look forward to collaborating with award-winning and emerging creative talent in Asia Pacific and sharing authentic stories that reflect the unique cultural and social dynamics from this region to global audience.”