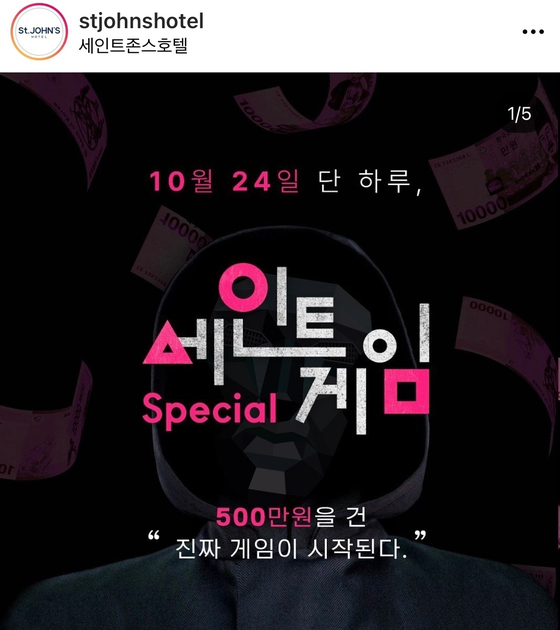 
A hotel in Gangneung, Gangwon, attempted to host a real-life “Squid Game” inspired by the hit Netflix series, but the city government shot it down on Wednesday citing Covid-19 concerns.

The four-star St. John's Hotel in the Northeastern city announced on Sunday that it was planning to host a reenacted version of Squid Game, dubbed “Saint Game” after the hotel’s name.

The hotel said that participants will be able to experience games from the show such as “Red Light, Green Light,” tug of war and the honeycomb game. The event was scheduled for Oct. 24 and the final winner was promised prize money of 5 million won ($4,200).

However, the Gangneung city government issued an administrative order putting a halt to the hotel’s plans. Gangneung is currently under Level 3 social distancing, meaning hotels and other lodging facilities are not allowed to host parties or mass gatherings. The same measures also apply under Level 2.

“Saint Game” was intended to accept participants regardless of whether they are staying at the hotel or not.

“Squid Game” launched last month and tells the story of 456 contestants who play children’s games with their lives at stake in order to win 45.6 billion won ($38.7 million). The series proved to be a worldwide hit, topping Netflix’s daily charts in all 83 countries that the platform keeps a tally in, becoming the most-watched Netflix original series of all time.