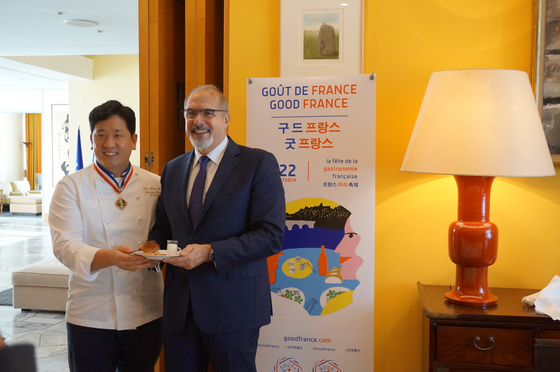 French Ambassador to Korea, Philippe Lefort, right, is with chef Kim Young-hoon at a press conference at the French diplomatic residence in Seoul on Thursday to launch the Goût de France (Good France) festival in Seoul. The festival will be held across restaurants in the city through Oct. 22. [ESTHER CHUNG]


The Centre-Val de Loire, a region where the French ways of enjoying a good meal have been handed down from generation to generation, will take center stage in the Goût de France (Good France) festival in Seoul through next Friday.

“The Centre-Val de Loire has unique ways with preparing the meat, and is a region rich with cuisines centering on freshwater fish caught in the River Loire,” said Philippe Lefort, ambassador of France to Korea, in speaking with the press at his residence in Seoul on Thursday. “Every participating chef in Korea will have the freedom to come up with creative menus using the ingredients and traditions of cooking from the region.”

The annual festival, at which over 5,000 chefs gathered to showcase French cuisines worldwide in 2019, was skipped last year due to the pandemic.

Emerging from the hiatus, the culinary event will center on sustainability and the cuisines and traditions based in Centre-Val de Loire, the region that was first referenced by Unesco experts for the inscription of the gastronomic meal of the French as an intangible cultural heritage in 2010.

“Our message is to pass on to future generations the balance between humans and nature that we must preserve,” said Lefort. “In fact, in the past, productivity could not be guaranteed due to lack of technology, but today it is possible. But it is necessary to preserve the traditional way of preparing cuisines, which would utilize resources just as they are without changing their nature. The chefs will prepare the dishes with this in mind, to share a message on how we can coexist peacefully with nature.”

The festival launched Thursday and will be held across restaurants in Seoul through Oct. 22. The list of participating restaurants is to be released by the French Embassy in Seoul.

As a sneak peek into the festival's events, the embassy showcased on Thursday the dishes of tarte tatin, mini Danish pastry, and pork rillettes, all made with left-over ingredients or scraps that are usually thrown away in the kitchen. The tarte tatin was said to have been first created through a mistake made by two Tatin sisters in the town of Lamotte-Beuvron of the Loire Valley.

“More chefs today are asking themselves what more they can do to reduce food waste and help protect the environment,” said chef Kim Young-hoon of Kim Young Mo Patisserie, who also met with the press at the residence on Thursday. “It’s so important for the culinary sector to grapple with this question, and to pass onto the next generation our know-how on sustainable gastronomy, just as our forerunners have passed down the best of the culinary practices to us.”

Kim became the first Korean to win the Un des Meilleurs Ouvriers de France in 2019 when he competed in the event and won the title in the ice cream division. The award means “one of the best craftsmen in France.”

The two-Michelin-star chef of La Maison d’à Côté in Montlivault, Christophe Hay, will be the ambassador of the festival this year.