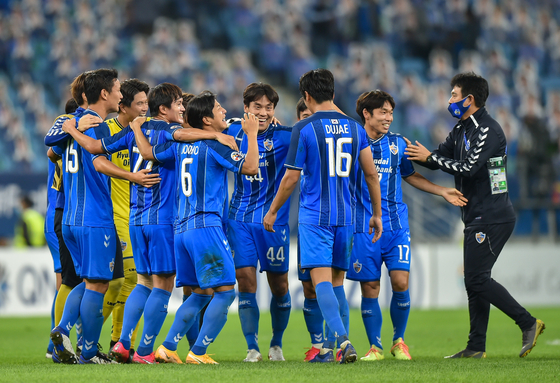 Ulsan Hyundai players celebrate after beating Persepolis FC of Iran in the final of the 2020 AFC Champions League in Doha, Qatar on Dec. 19, 2020. [XINHUA/YONHAP]


Three Korean teams will compete in the quarterfinals of the continental AFC Champions League on Sunday, as K League rivals Ulsan Hyundai and Jeonbuk Hyundai Motors face off and the Pohang Steelers hope to overcome a recent dry spell against Japanese side Nagoya Grampus.

The clash between the K League's top two clubs on the biggest club football stage in Asia has been a long time coming. Ulsan and Jeonbuk last faced off in the Champions League in 2006, when Jeonbuk emerged victorious on aggregate.

This year, Ulsan enter the match as the reigning champions, having beaten Iranian side Persepolis to the Champions League title last year. They remain undefeated in their last 17 Champions League games, with a 15-game regular time winning streak that only ended with their Round of 16 draw with Kawasaki Frontale.

Ulsan also have the edge over Jeonbuk in the domestic K League, topping the table with 64 points to 2020 champion Jeonbuk's 63. The two sides have faced off three times in the K League this season, drawing two games 0-0 with Ulsan taking the only win, 4-2.

But Ulsan are by no means guaranteed a win. Jeonbuk remain a serious contender and although Ulsan appear to have a slight edge this season, in recent years, Jeonbuk has tended to come out on top.

Jeonbuk reach the quarterfinals after beating Thai side BG Pathum United on penalties in the Round of 16. During that game, Jeonbuk had 39 shots, a new record for a single Champions League game since records began. That they only managed to score one goal during regular time slightly takes the shine off that milestone.

Jeonbuk also have a serious weapon in striker Gustavo, who has scored eight goals and three assists in this year's tournament alone, far outpacing any other player.

Ulsan and Jeonbuk will face off at Jeonju World Cup Stadium in Jeonju, North Jeolla at 7 p.m. on Sunday.

Before that game, the Steelers will attempt to snap their dry spell against Nagoya. Pohang and Nagoya started the 2021 Champions League in the same group, with Nagoya winning the first game 3-0 and the second ending in a 1-1 draw.

In the quarterfinal, the Steelers can fall back on experience to try and gain an edge over the Japanese side. Pohang have played 14 knockout games at the Champions League, losing only two. They have gone on to win the tournament three times, making them one of the winningest teams in Champions League history.

Nagoya, on the other hand, have been far less successful in the Champions League, having only made it to the knockout stage eight times and the quarterfinals twice. They have lost five of those eight games and have never kept a clean sheet.

Pohang will take on Nagoya at 2 p.m. at Jeonju World Cup Stadium.

The two winning teams will advance to the semifinals on Oct. 20.

On the other side of the bracket, United Arab Emirates side Al Wahda will take on Saudi club Al-Nassr and Persepolis will face Saudi club Al Hilal. Both games will be held on Saturday.