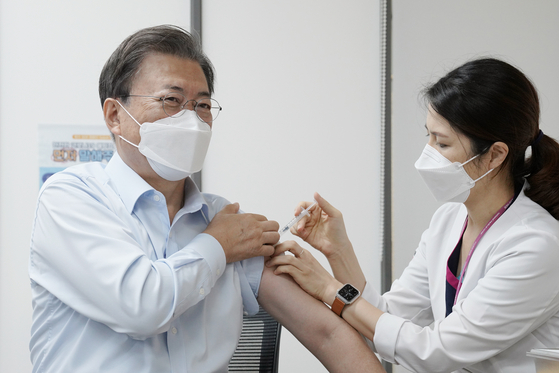 President Moon Jae-in, left, receives a Covid-19 vaccine booster shot Friday at the National Medical Center in central Seoul ahead of an overseas trip at the end of this month. [YONHAP]

The government announced Friday that social gatherings of up to eight people will be allowed in the greater Seoul area after 6 p.m. starting Monday, seen as a step toward ultimately shifting to a scheme of living with Covid-19 next month.

Under the slightly eased social distancing guidelines applied from Monday for the next two weeks, the cap for social gatherings after 6 p.m. will be increased from the current six people to a maximum of eight, as long as no more than four in a group are unvaccinated, in the metropolitan area of Seoul, Gyeonggi and Incheon. This includes gatherings at restaurants, cafes and multi-use facilities.

A maximum of 10 people, again with no more than four unvaccinated people, will be allowed to meet outside of greater Seoul starting Monday.

The Seoul metropolitan area remains at the highest social distancing Level 4, while other parts will be at Level 3.

Under the current guidelines, cafes and restaurants in greater Seoul are allowed to operate until 10 p.m.

However, libraries, study cafes, concert halls and movie theaters will be able to stay extend their hours until midnight starting Monday in Level 4 areas.

Level 3 areas will additionally be able to run restaurants and cafes until midnight.

The new set of social distancing rules are an intermediary step ahead of preparations for a new "With Corona" scheme expected to be introduced at the beginning of November, where people will learn to live with the coronavirus being treated as an infectious respiratory disease like the seasonal influenza.

Prime Minister Kim Boo-kyum said in a coronavirus response meeting Friday, “We hope this will be our last adjustment to our social distancing guidelines so that we can begin a gradual return to normalcy in phases starting November.”

He said that the eased measures reflect incentivizing vaccinated people and aim to “relieve the pain of small business owners and merchants.”

Korea added 1,684 new Covid-19 infections, including 1,670 local cases, raising the total to 339,361, according to the Korea Disease Control and Prevention Agency (KDCA) Friday.

Around 78.4 percent of the population have received at least one dose of a Covid-19 vaccine, while 62.5 percent are now fully vaccinated, said the KDCA.

President Moon Jae-in and Kim Jung-sook, the first lady, received booster shots Friday morning at the National Medical Center in central Seoul ahead of an overseas trip at the end of this month.

Moon and Kim received their vaccines on March 23 and April 30. Their booster shot was from Pfizer.

The government began inoculations of Pfizer booster shots since Tuesday for frontline health workers at Covid-19 treatment hospitals, who were vaccinated six months ago.

Older people who received their shots six months ago and people who need to travel are also eligible to receive booster shots even if it is under six months.