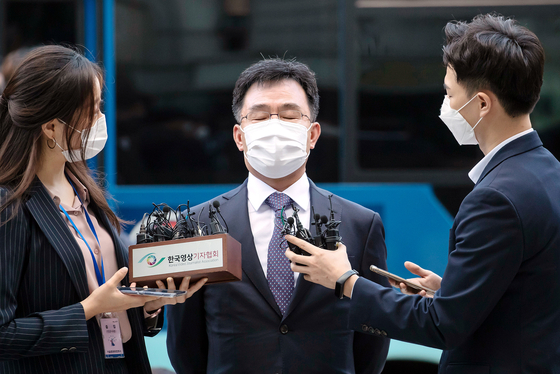 Kim Man-bae, center, owner of Hwacheon Daeyu, an asset management company at the heart of the snowballing Daejang-dong land development scandal, speaks to reporters as he arrives for a hearing at Seoul Central District Court in Seocho District, southern Seoul, Thursday. The court later refused to issue an arrest warrant for him. [JOINT PRESS CORPS]


A Seoul court late on Thursday night refused to issue an arrest warrant for the owner of a small company at the heart of a snowballing land development corruption scandal on bribery and other charges.

Prosecutors requested a warrant from the Seoul Central District Court to arrest Kim Man-bae on Tuesday on charges related to his minor asset management company Hwacheon Daeyu and the colossal profits it raked in from the 2015 Daejang-dong land development in Seongnam, Gyeonggi.

The Seoul Central District Court denied the prosecution's request, citing an insufficient explanation of the need to detain him, which could prove a setback to the prosecution’s plans to expand the investigation into the various lobbying allegations against him.

In their warrant application, prosecutors alleged that Kim enlisted the help of Yoo Dong-gyu, former acting president of the Seongnam Development Corporation — which held a 50 percent stake in the mixed private-public development consortium — to delete a clause in the investment contract that would have limited the amount of profit that private companies could gain from the project.

Prosecutors argued that in doing so, Kim committed breach of trust under the Special Economic Crimes Act by causing more than 110 billion won ($92 million) in damages to the Seongnam city government.

Kim is further accused of committing bribery by paying Yoo 500 million won out of a promised sum of 70 billion won, as well as paying 5 billion won in the guise of a severance payment to the son of Rep. Kwak Sang-do, a former lawmaker from the main opposition People Power Party (PPP), in order to buy favor with the politician.

Kwak’s son worked at Hwacheon Daeyu as a mid-level employee for less than six years until March.

Kim is also accused of embezzling 5.5 billion won out of a total of 47.3 billion won he borrowed from his own company. That money remains unaccounted for.

Kim denied all allegations against him Thursday.

Kim, a former journalist, and his company first attracted attention by reaping a profit of 57.7 billion won ($48.3 million) on an investment of 49.95 million won, which was a 1 percent stake in the project. The company also made 300 billion won in sales of apartments in the development, while its Cheonhwa Dongin affiliates took an additional 400 billion won in profits.

The fact that Kim had interviewed the ruling Democratic Party (DP) presidential candidate and Gyeonggi Gov. Lee Jae-myung in 2014, when he was mayor of Seongnam, aroused suspicion that his company had benefited from political favors in the city’s project.

Kim’s alleged connection with Lee, as well as Yoo’s previous work on Lee’s mayoral and gubernatorial campaigns, have led to calls from the main opposition People Power Party (PPP) for the Gyeonggi governor to abandon his presidential run.

The allegations surrounding the Daejang-dong project have been fueled by 19 recordings submitted to the state prosecution service by an accountant named Jeong Young-hak who owns Cheonhwa Dongin No. 5, an affiliate of Hwacheon Daeyu.

According to a source in the prosecution service, Kim says in the recordings that another individual, whom he only referred to as “that person,” owned 50 percent of Cheonhwa Dongin No. 1, another Hwacheon Daeyu affiliate, which took than 120 billion won in profits from the project.

Prosecutors grilled Kim over the identity of the person he mentioned in the recordings in their questioning Monday.

The PPP presidential frontrunner and former Prosecutor General Yoon Seok-youl claimed that Lee is “that person” and urged him to submit to questioning in the case.

However, as he responded to reporters’ questions at the court in Seocho District, southern Seoul, Thursday morning before his warrant review, Kim denied both enjoying any kind of “special relationship” with the governor or the existence of another individual owning Cheonhwa Dongin No. 1.

On Friday, prosecutors raided offices in charge of the Daejang-dong development project in Seongnam City Hall as part of an investigation into the scandal and seized related documents.