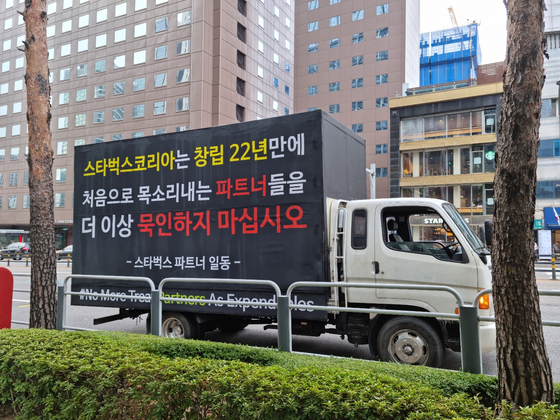 An LED truck drives around the Starbucks Korea headquarters building in central Seoul on Oct. 7, displaying complaints from the company's baristas. In interviews with local news outlets, staffers claimed their salaries were insufficient and the work environment was poor. [JOONGANG ILBO]


Starbucks Korea will hire 1,600 more people and restructure its salaries by the end of this year after baristas threw down their aprons earlier this month to protest overwork and understaffing.

The company said Sunday it will start hiring new employees from Oct. 22 across the country. It will revise the current salary system, which may include raising the salaries for the heads of its branches.

It will also start paying baristas differently according to how long they have been working for the company and how well they do their jobs.

To ease the workload of staff on special event days, a task force will be put together to look into planning for promotional events for new seasons or new products.

Starbucks baristas held a series of protests on Oct. 7 and 8 after a reusable cup day event on Sept. 28 that staff claimed overloaded them with work.

A plastic cup was given out for free with every drink on that day, resulting in people swamping Starbucks cafes. Baristas struggled to keep up with the orders, with some shops reporting backlogs of several hours.

Instead of a walk-out strike, the baristas hired LED trucks to drive around neighborhoods in Seoul displaying their complaints. In interviews with local news outlets, staffers claimed their salaries were insufficient and the work environment was poor.

“We encountered some difficulties because we couldn’t properly calculate the number of customers and revenue according to the time of the event and size of the cafes,” Starbucks Korea said.

“The new task force will be in charge of heeding the needs of staff from the beginning stages of a promotional event and coming up with detailed plans.”

The company will also expand the size and budget of the Partner Happiness Committee, a union-like negotiating group that represents the baristas and café managers at Starbucks Korea. Resting areas for staffers in all Starbucks across the country will be renovated by next year.