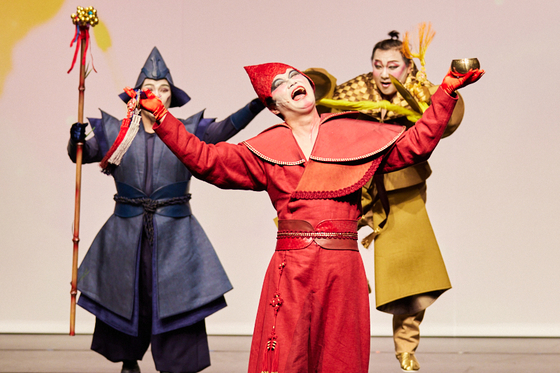 Actors in the upcoming "Sochundaeyuhee: Gwangdae after a Century" rehearse for the performance that is to run from Oct. 22 at the Jeongdong National Theater in central Seoul. [JEONGDONG NATIONAL THEATER]


On Dec. 2, 1902, Korean musical “Sochundaeyuhee” premiered at the Korean Empire's newly established Hyeopryulsa theater. It was the first ticketed performance ever to be held in Korea.

As people were used to watching performances for free, the idea of buying a ticket for a show was contentious. Yet despite uncertainly about the newfangled ticketing process, “Sochundaeyuhee” was a hit, and remained at the theater for years with the main storyline periodically changing.

Jeongdong National Theater that sits on the famous Jeongdong-gil by Deoksu Palace in central Seoul has decided to revive the show.

“We hope to bring new life into the modern performing arts that proliferated mainly in this area of Jeongdong back in the 1900s by reinterpreting them,” said Lee Su-hyun, the producer of the newly interpreted “Sochundaeyuhee: Gwangdae after a Century.”

“Sochundaeyuhee: Gwangdae after a Century” will kick off at the Jeongdong National Theater from Oct. 22 and run through Nov. 7.

The location of Hyeopryulsa, which was destroyed in a fire, was said to be near the site where the Saemunan Church now stands. The Korean Empire built a new theater in 1908 named Wongaksa. The National Jeongdong Theater opened in 1995 to “inherit the historical significance of restoring Korea’s first modern theater Wongaksa and the spirit of modern performing arts.”

“Therefore, it’s significant that we are reviving the gwangdae, [which means clowns in English], who led ‘Sochundaeyuhee’ 100 years ago in Jeongdong after a century,” said Kim Hee-chul, director of the theater. “This performance will be a work that clearly defines the identity of the theater’s art troupe that we newly established in March. The show will become the theater’s representative performance emcompassing dance, music and theater.”

In the show, according to producer Lee, the gwangdae from the 1902 performance will meet modern clowns and put on a show.

The medium that connects the two is the plague. According to historical records, performances to celebrate the 40th anniversary of Emperor Gojong’s accession to the throne were to be performed at Hyeopryulsa. The celebration, however, was canceled due to an outbreak of cholera in Seoul. The actors who came all the way to Seoul to perform for the ceremony thought they should at least perform something while they are in the capital, and that’s how “Sochundaeyuhee” was created.

“The current situation looks very similar to what happened in 1902,” said Ahn Kyung-mo, director of the show. “There’s this sense of duty for performing artists to create performances that people can laugh and enjoy to the fullest during such a period of pandemic and difficulties when there’s a thirst for the arts.

"The upcoming performance is not merely a restoration of the work from 1902, but an outcome of deep consideration on how to unfold the tradition of musical dance and comedy in the present day.”