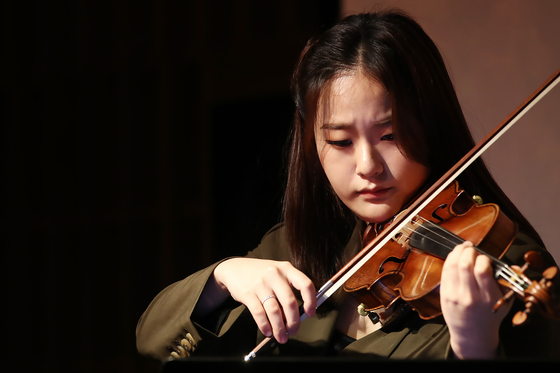 Violinist Lim Ji-young, who is taking part in the global "The [Uncertain] Four Seasons" project, showcases the recomposed version of Vivaldi’s ‘The Four Seasons’ by an artificial intelligence based on climate prediction data of Seoul in 2050" during a press conference held last week in Seoul. [YONHAP]

Her performance seemed to begin with the vigorous tune we all know, but soon the bright major chords changed to minor while many of the notes were skipped. The speed slowed and the longer Lim performed, the more it sounded like she was playing out of tune.

Did the 2015 winner of the prestigious Queen Elizabeth Competition suddenly develop stage fright?

“The piece that I just performed is the recomposed version of Vivaldi’s ‘The Four Seasons’ by an artificial intelligence system using climate prediction data of Seoul in 2050,” Lim said after performing the piece.

The piece was first performed in 2019 by the NDR Elbphilharmonie Orchester in Germany. Since then, it has been performed in countries around the world using each variations as it differs by longitude and latitude along with accumulated climate data.

On Wednesday, Lim will perform the Seoul variation of the piece accompanied by a chamber orchestra headed by Seoul Philharmonic Orchestra’s associate concertmaster Wayne Lin at the Lotte Concert Hall. Korea is the first Asian country taking part in the project.

By making climate change audible, Lim said she hopes “the audience members can have somewhat of a direct experience of how serious the situation is.”

“After receiving the score and playing it for the first time, I was also shocked by the difficult, bizarre and dense sound,” said Lim. “When I first listened to the music file, I actually had to turn it off after three seconds.”

Lim said the recomposed version evokes emotions of despair and hopelessness that allowed her to imagine what Seoul would look like in 2050.

“The average temperature will go up and Seoul will be similar to a tropical country and most of the marine animals will become extinct,” Lim said.

To make a stark comparison, Lim will be playing the original version of Vivaldi’s music during the second part of the concert.

After the concert in Seoul, the project will be taken to Scotland for the upcoming 2021 United Nations Climate Change Conference (COP26). Participating organizations will be performing different cities’ variations online in a series to kick off the event from Oct. 31. The Seoul variation is expected to be performed on Nov. 1.