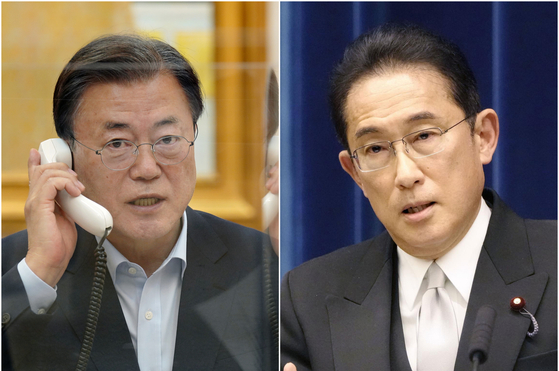 President Moon Jae-in in his first call with Japan’s prime minister on Friday called on Fumio Kishida to “seek a diplomatic solution” to the issue of forced labor, a longstanding controversial and thorny topic between the two countries.

“It is a matter of difference in the legal interpretation of the scope of application of the 1965 Korea-Japan agreement,” Moon told Kishida over their first phone call since Kishida took office, according to presidential spokesperson Park Kyung-mee. “Considering that it is desirable to seek a diplomatic solution between the two countries, let us accelerate consultations and communication between the diplomatic authorities.”

The call that lasted about half an hour took place 11 days after Kishida was inaugurated. Kishida had already spoken with leaders of the United States, Australia, Britain, India, China and Russia.

Korea and Japan are at odds on a number of historical issues, including those related to forced labor and so-called comfort women, or women forced into sexual slavery by the Japanese military before and during the Pacific War. Estimates of comfort women range from the tens of thousands to up to 410,000, many of whom were of Korean descent. Millions of Koreans were also subjected to forced labor during the Japanese occupation of Korea from 1910 to 1945.

Japan claims that all compensation issues related to its colonial rule and forced labor were resolved through a 1965 treaty normalizing bilateral relations. This has been disputed by landmark court rulings in Korea in recent years, including one by the Korean Supreme Court on Oct. 30, 2018, when it ordered Japan's Nippon Steel & Sumitomo Metal to compensate victims of forced labor during World War II.

Japan also contends that a bilateral agreement of 2015 resolved the comfort women issue.

The two countries’ foreign ministries struck a deal on Dec. 28, 2015 to resolve the comfort women issue, which included an apology by the Japanese government and a 1 billion yen ($8.7 million) fund for the victims. The agreement provoked an immediate backlash from some survivors and civic organizations, who claimed Japan should take clearer legal responsibility by paying reparations.

“I think it is most important to find a solution that the victims are satisfied with and one that does not inflict costs on diplomatic ties,” Moon said in regards to the comfort women issue. “As there are only thirteen survivors left, there is not much time for both countries to resolve the issue.”

Prime Minister Kishida told Moon Japan’s positions on these issues, which were not elaborated on by the Blue House.

After the call, Kishida told media outlets including Kyodo News and NHK that he "strongly urged South Korea to take appropriate action," adding that bilateral ties are in an "extremely difficult situation.”

“It is necessary to quickly resume dialogue and diplomacy with North Korea in order to prevent North Korea from building up its nuclear and missile capabilities and achieve complete denuclearization and lasting peace on the Korean Peninsula,” Moon said during the call with Kishida, according to Moon’s office. “I highly appreciate Prime Minister Kishida’s willingness to meet with Chairman Kim Jong-un directly without conditions.”

Kishida expressed his intention to meet with Kim to resolve the Japanese abductee issue. Tokyo claims that 17 of its nationals have been abducted by North Korea.

Moon in the call also expressed his hopes to meet with Kishida in person to “discuss without restrictions the development of our bilateral ties,” according to his spokesperson.

The last Korea-Japan summit was held in December 2019 when Moon met with then-Prime Minister Shinzo Abe in Chengdu, Sichuan Province, China. Moon briefly engaged with Abe’s successor Yoshihide Suga on the sidelines of the Group of Seven summit in June this year, but it was not an official summit.

Kishida’s office said there were no plans for a summit with Moon at the moment.