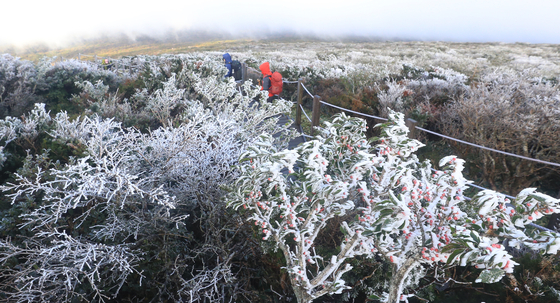 Frost blankets trees along a trail on Mount Halla on Jeju Island on Sunday. [YONHAP]


Seoul experienced the first frost of the year on Sunday, a week earlier than last October and 17 days earlier than the average date, according to the Korean Meteorological Administration (KMA).

The mercury in the capital city plunged to 1.3 degrees Celsius (34.34 degrees Fahrenheit) on Sunday, marking the lowest recorded temperature for Seoul in mid-October in 64 years, the state weather agency said.

However, the effect of wind chill dropped temperatures felt by people in the capital to below zero degrees Celsius.

Temperatures began to fall on Saturday afternoon as the KMA issued the first cold wave alert in October for Seoul since 2010.

The morning low in Seoul on Sunday was the lowest since Oct. 13, 1957, when the figure was 1.2 degrees Celsius, according to the state weather agency’s records.

Some parts of Seoul experienced temperatures below zero as the first frost was seen in the city.

The sudden onset of wintry cold affected other parts of the country as well, with temperatures nationwide falling more than 10 degrees Celsius on average from a day earlier.

Ice and frost were witnessed across the country, including on Mount Halla on Jeju Island, which is on average the warmest region in the country.

Although the state news agency lifted all cold wave alerts issued the previous day for most of the country, the cold continued to be felt during the day on Sunday. The chill is expected to continue through the week, according to the agency.

The agency explained that the unseasonably early cold wave resulted from Arctic chill from the North Pole descending upon the peninsula as warm air from the subtropical high pressure moves away.