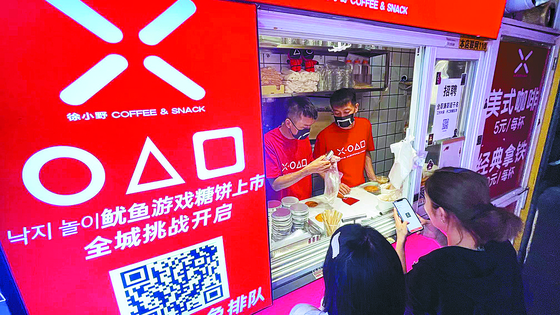 As Netflix Korea’s original series “Squid Game” has become the talk of the town in China, dalgona, Korea’s retro candy made with a mix of melted sugar and baking soda stamped with random shapes, is now popular on the streets of Shanghai. [YONHAP]


PARK SUNG-HOON
The author is a Beijing correspondent of the JoongAng Ilbo.

China-related news about Netflix series “Squid Game” is generally focused on criticism of Chinese people’s illegal viewing and copyright infringement. But I had another impression as I am based in China.

First, the drama is quite popular in China. On major online shopping malls like Taobao, umbrella-shaped dalgona candy is very popular.

The searches for “Squid Game” add up to more than 2 billion on Weibo. It is the most searched among domestic and international videos on Tencent. The drama is distributed illegally, but I haven’t seen any crackdown by Chinese authorities. They may think it won’t be an issue as the series deals with the vices of capitalism.

On October 13, China’s mainstream media China Observer published an article titled “The Squid Game, Most Watched Series in Netflix History.” We need to pay attention to the comments as they are not censored.

A comment said, “Even though many people despise ‘Squid Game’ and Netflix, it is an undeniable fact that Chinese movies and television dramas cannot become global hits.” Another says, “Korean films and dramas are no use in changing real society but are truly profound in revealing the dark sides.” Many comments point out the competitiveness of Korean content and the lack of competitiveness of Chinese film and dramas.

That overlaps with the success of the movie “The Battle at Lake Changjin.” Produced with the Chinese government’s assistance, its box office exceeded 4 billion yuan ($621.8 million), the sixth largest in China’s history. But it garnered little attention abroad. It was not released internationally and even earned sneers that China was stained with patriotism.

The atmosphere can be confirmed on Chinese social media. “Simple yet fun, makes your head heated. If Chinese popular culture doesn’t study these points, it will be really hard to enter the global cultural market.” It is interesting that in China, where people hardly express critical thoughts, the limits of Chinese productions are being addressed because of “Squid Game.”