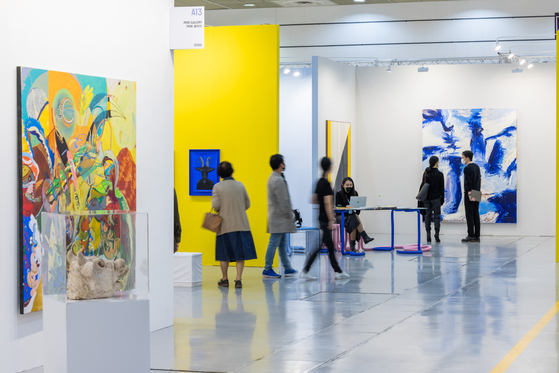 A view of the 2021 edition of the Kiaf Seoul art fair, which wrapped up on Sunday with record sales of 65 billion won ($54.8 million). [KIAF SEOUL]


The 2021 edition of Kiaf Seoul, one of Korea’s major art fairs, wrapped up on Sunday with record sales of 65 billion won ($54.8 million), proving that the Korean art market is booming.

The Galleries Association of Korea, which hosts the annual art fair, said in a statement Monday that the five-day art market attracted 88,000 visitors, the largest number in the fair’s 20-year history. In particular, its sales more than doubled compared to the previous year to record the highest-ever amount of 65 billion won. The association added that 35 billion won worth of artwork was sold on the first day of the fair which was exclusively for VVIPs.

Visitors included many celebrities such as K-pop superband BTS’s members RM and V, star actor couple Lee Byung-hun and Lee Min-jung and other famous actors So Ji-sub, Hwang Shin-hye and So Yoo-jin, according to the association.

“The ‘Discovering Galleries’ program, which explains works on display in the galleries’ online viewing rooms [on the Kiaf website] helped boost sales,” a representative of the association said. “The online viewing rooms will remain open until midnight on Saturday, Oct. 23, so art collectors can purchase additional artwork there.”