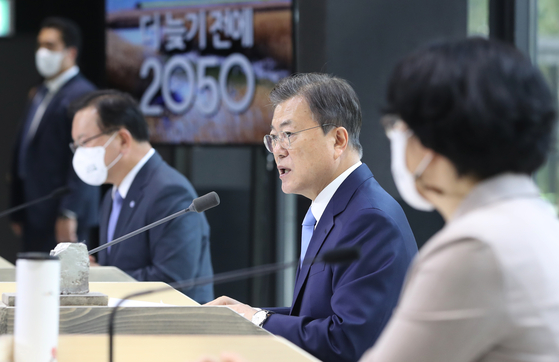 President Moon Jae-in said Korea will reduce its greenhouse gas emissions by 40 percent from the country’s peak in 2018, upgrading its 2030 nationally determined contributions (NDC) target ahead of a global climate conference next month.

Moon was presiding Monday over the second session of the presidential committee on carbon neutrality on Nodeul Island in central Seoul, which drew up roadmaps for cutting greenhouse gas emissions by 2030 and bringing them to net-zero by 2050.

“The 40 percent reduction goal demonstrates Korea's strong commitment to carbon neutrality." Moon said, "and a sense of responsibility towards the international community.”

The Korean government will formally submit its new NDC target during the 2021 United Nations Climate Change Conference, or COP26, from Oct. 31 to Nov. 12 in Glasgow, Scotland, which will be attended by Moon and other world leaders.

The new NDC target came a year after Moon first pledged that Korea would aim to reach carbon neutrality by 2050.

On Oct. 8, the government announced that its goal of reducing greenhouse gas emissions was being raised from 26.3 percent to 40 percent, which was met with a mixed reaction from related industries and civic groups.

The committee on Monday cemented the NDC target.

The committee also revealed its 2050 carbon neutrality scenarios, which include plans to scrap coal-fired power generation.

One scenario aims to eliminate all thermal power generation using fossil fuels and liquefied natural gas (LNG), while a second plan will keep LNG as a power source. The scenarios include plans to utilize carbon capture, utilization and storage (CCUS) capabilities to achieve net-zero goals.

According to the roadmaps, the proportion of coal power generation in 2030 will decrease from the current 41.9 percent to 21.8 percent, while renewable energy will reach 30.2 percent from 6.2 percent. The goal is to reduce emissions in the power generation sector by 44.4 percent.

Moon said the 2050 carbon neutrality scenario sets the direction Korea will need to head in, adding, “This is a path that no one has taken, and a very difficult one, but it must be boldly challenged and implemented[…] The whole country must work together to reduce greenhouse gas emissions and realize carbon neutrality.”

Moon especially stressed the need to convert to clean energy to reach the NDC targets by 2030, adopting new technologies related to carbon neutrality, such as hydrogen reduction and CCUS technology, said the Blue House, and encourage energy-efficient buildings and transportation.

Moon urged Korea to “speed along the creation of a hydrogen economy that produces, stores, transports, and utilizes hydrogen, a key energy source in the carbon-neutral era.”

He called on Korean industries to “lead the market” in areas like electric vehicles and hydrogen cars.

Moon called on the government to introduce financial programs to incentivize carbon neutrality efforts and increase investment for technological innovation.

Moon acknowledged to the carbon neutrality committee, “It is a very challenging goal, and there will be many concerns in the industry and the labor community whether they will be able to meet it.”

Likewise, he said that Korea “plays a very important role as it contributes to global carbon neutrality through technical support for developing countries.”

Korea has the experience of transitioning from a developing to an advanced country, so it would be an appropriate country to “serve as a bridge between developing countries and developed countries,” he said.

The carbon neutrality committee, a public-private sector body under the direct authority of the president, was launched on May 29 to oversee major national policies in the country’s transition to net-zero emissions.

In August, the committee described three scenarios to reduce greenhouse gas emissions by 2050 and it reviewed them in the following weeks, soliciting feedback from the business sector, civic and labor groups, local governments and a citizens’ council.

Industries have balked at the targets, while environmental groups said the government needs to be even more ambitious in its goals for greenhouse gas reductions.

Korea's greenhouse gas emissions declined for a second consecutive year at an estimated 648.6 million tons in 2020, down 7.3 percent from 2019, according to the Environment Ministry.

The meeting was also attended by Prime Minister Kim Boo-kyum, co-chair of the carbon neutrality committee, most of Moon’s ministers, environmental experts and leaders of industries and civic groups.

The committee's carbon neutrality roadmaps will get final approval at a Cabinet meeting on Oct. 27.

Representatives of the steel, petrochemical, and cement industries, large carbon emitters, criticized the government’s targets for being unrealistic.

After the committee’s announcement of its roadmaps, the Korea Enterprises Federation expressed “regret at the unilateral decision made without sufficient social consensus and analysis on the economic and social impact.”