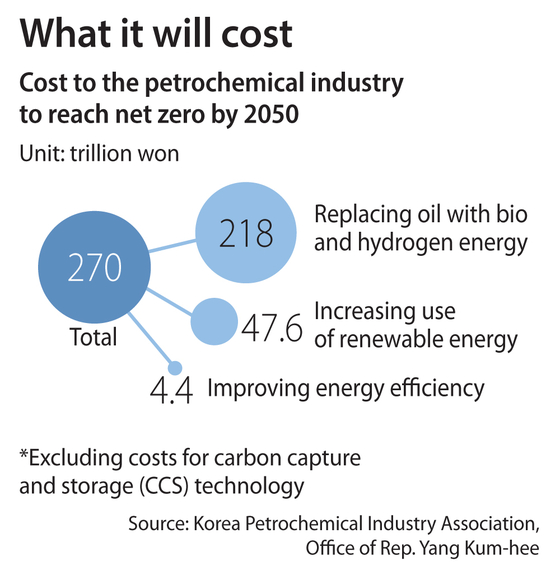 Businesses are facing growing pressure to adopt the government's latest carbon-cutting plan, with many saying it's not possible to achieve.

The presidential committee on carbon neutrality announced a new nationally determined contribution (NDC) target on Monday, saying Korea will reduce its greenhouse gas emissions by 40 percent from the country’s peak in 2018 by 2030. The figure was upgraded from the earlier NDC target of a 26.3 percent reduction.

The government further announced it will restrict industrial sector carbon emissions to 51.1 million tons of carbon dioxide equivalent (CO2eq) by 2050. That was down 3.7 percent from the previous goal of 53.1 million tons of CO2eq.

The carbon neutrality road map will get final approval at a Cabinet meeting on Oct. 27.

“The astronomical costs actually needed to achieve the NDC target by 2030 weren’t revealed,” said a spokesperson for the Federation of Korean Industries (FKI). “The people and companies are the ones that have to cut carbon emissions, but there is no way for them to know how much it will cost.”

Following the government announcement, the FKI on Monday released a statement condemning the plans.

“Business and economic groups have been requesting to relax the target, considering Korea’s world renowned high energy efficiency and the difficulty of implementing carbon reduction technologies, but the requests were not accepted,” read the statement. “We ask that our requests be thoroughly examined at the Cabinet meeting so that the 2030 carbon emission reduction target can be set in line with our economic conditions.”

Companies are worried that the government is setting grand targets when the right technologies haven’t been developed yet.

“We’ve already increased energy efficiency to the world’s highest level, and there is almost no other way to cut carbon emissions,” said a KOSA official. “Hydrogen-based steel making technologies can be commercialized after the mid-2030s at the earliest.”

Steelmaker Posco announced it will reduce greenhouse gas emissions by 10 percent until 2030, compared to its average emissions between 2017 and 2019. Despite the company’s green target, if proper carbon reduction technology isn’t developed, Posco has no choice but to cut its production to decrease carbon emissions.

The same applies for companies in other industries.

“We’re conducting research to increase the use of eco-friendly alternatives to fuel, but the pace of development is not as fast,” said an official working for a petrochemical company. “Considering the time needed for the technology to be implemented and to manufacture products, it’s not going to be easy to reach the government’s target."

Buying certified emission reduction (CER) credits is one way, but that just adds to companies' costs.

“CER credits are very hard to cope with,” said an official from a cement manufacturing company. “If we fail to develop sufficient technologies by 2030, there’s no choice but to reduce production so that emission levels can match the [government proposed] target.”

“Considering Korea's industries are centered on manufacturing, huge costs are needed when the greenhouse gas reduction goal is suddenly increased,” said an official for the Korea Chamber of Commerce and Industry. “Prices of raw materials and manufacturing costs will increase because it’s expensive to utilize renewable energy, eventually weakening the competitiveness of companies.”

Industries are baffled by the targets, while environmental groups are pushing the government to be even more ambitious in its carbon neutrality goals.

Following the Monday announcement, environmental groups such as Climate Strike Korea gathered on Nodeul Island, central Seoul, where the government meeting was held, to protest the lower-than-expected NDC target of 40 percent.

Coal power is dirty but it gets us through the summer