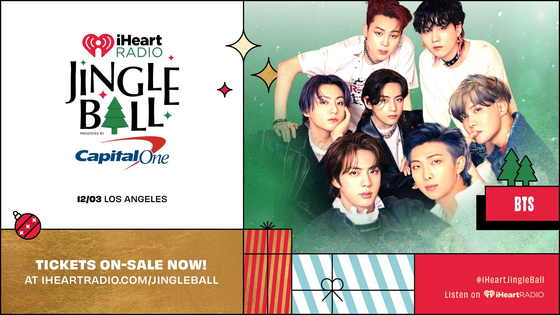 This year’s Jingle Ball Tour takes place from Nov. 30 to Dec. 19 and will kick off in Dallas, then travel through major U.S. cities such as Los Angeles, Minneapolis, Chicago, New York City, Boston, Philadelphia, Washington, D.C., Atlanta and Miami.

BTS will appear in the Los Angeles concert on Dec. 3.

The event is hosted annually by American radio network iHeartRadio, which also announced BTS as part of this year’s lineup through its official website and social media.

BTS participated in the 2019 Jingle Ball Tour and the 2020 iHeartRadio Music Festival which was streamed online due to the Covid-19 pandemic.

BTS is also set to host its first offline concert in the United States in two years: “BTS Permission to Dance On Stage – LA” in Los Angeles with four runs on Nov. 27 and 28 and Dec. 1 and 2.