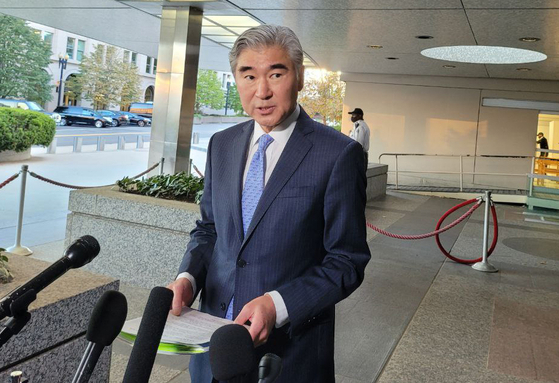 
The chief U.S. nuclear negotiator said he discussed an end-of-war declaration proposal with his South Korean counterpart Monday in Washington and will continue such talks in Seoul later this week.

"The U.S. continues to reach out to Pyongyang to restart dialogue," Sung Kim, the U.S. special representative for North Korea, told reporters after bilateral talks at the U.S. State Department with Noh Kyu-duk, Seoul's top nuclear envoy. "Our intent remains the same. We harbor no hostile intent towards the DPRK, and we are open to meeting with them without preconditions."

He referred to the acronym for the North's official name, the Democratic People's Republic of Korea.

Kim added, "Special Representative Noh and I also discussed the ROK [Republic of Korea's] end-of-war proposal, and I look forward to continuing those discussions and other issues of mutual concern when I'm in Seoul later this week."

In an address to the United Nations General Assembly in New York last month, President Moon Jae-in proposed that the two Koreas, the United States, and possibly China formally declare an end to the 1950-53 Korean War, which ended with an armistice agreement.

Noh, Seoul's special representative for Korean Peninsula peace and security affairs, kicked off a trip to Washington Saturday for talks with his U.S. and Japanese counterparts following a four-day trip to Moscow to meet with Russia's top nuclear envoy. Kim and Noh's bilateral talks Monday came just three weeks after their meeting in Jakarta, Indonesia, on Sept. 30. They were also scheduled to hold a three-way meeting with Japan's top nuclear envoy, Takehiro Funakoshi, Tuesday.

Describing his meeting with Noh as being "excellent," Kim reaffirmed the United States' commitment to working closely with its allies and partners "to achieve completely denuclearization and a lasting peace on the Korean Peninsula."

He continued, "To reach this objective, we will seek diplomacy with the DPRK to make tangible progress that increases the security of the United States and our allies. This includes considering potential engagement with the DPRK to reduce tensions."

Such engagement, along with pursuing the possibility of an end-of-war declaration, could include humanitarian cooperation.

"We are prepared to work cooperatively with the DPRK to address areas of humanitarian concern," said Kim. "The U.S. supports the provision of humanitarian aid, consistent with international standards for access and monitoring, to the most vulnerable North Koreans."

However, Kim said, "Even as we remain open to dialogue, we also have a responsibility to implement the UN Security Council resolutions addressing the DPRK," referring to the stringent international sanctions on the North meant to curb its nuclear and ballistic missiles programs.

The Joe Biden administration has put forward a Pyongyang policy that would take a "practical and calibrated" approach and has offered dialogue "without preconditions," while remaining committed to sanctions enforcement and improving the human rights situation in the North.

"Furthermore, consistent with the Biden-Harris administration's focus on human rights, we will continue to advocate for the human rights of the North Korean people," said Kim. He called for an "immediate resolution of the abduction issue," referring to Japanese nationals believed to have been kidnapped by North Korean agents in the 1970s and 1980s.

Noh told reporters alongside Kim, "A significant part of today's discussion was devoted to in-depth discussions related to an end-of-war declaration," adding that he believes that Washington's understanding of such a declaration has "deepened" through discussions.

He confirmed that the two sides discussed various initiatives to engage North Korea, including joint humanitarian cooperation projects and other "meaningful confidence-building measures."

Kim's visit to Seoul for follow-up talks, just a few days after Noh's visit to Washington, is leading experts to wonder whether the negotiators are nearing some breakthrough in efforts to engage Pyongyang.

Noh and Kim will hold a consultation on “key issues related to the Korean Peninsula, including an end-of war declaration” on Saturday, confirmed Choi Young-sam, spokesman for Seoul’s Foreign Ministry, in a briefing Tuesday.

The nuclear envoys’ meetings come amid a flurry of high-level talks between Seoul and Washington in recent weeks, seen as an attempt to intensify Pyongyang’s return to denuclearization talks that have been at a standstill since 2019.

In a speech to the Supreme People's Assembly on Sept. 29, North Korean leader Kim Jong-un directly responded to the Biden administration's calls for dialogue for the first time, accusing the United States of hiding a "hostile" policy. He also indicated that Pyongyang is open to improving inter-Korean relations. However, Pyongyang has also simultaneously launched a series of missile tests over the past month.

South Korean Foreign Minister Chung Eui-yong met with U.S. Secretary of State Antony Blinken on the sidelines of the UN General Assembly on Sept. 22 and again at the OECD Ministerial Council Meeting on Oct. 5 in Paris, where he explained Seoul's view of an end-of-war declaration "as a meaningful confidence-building measure" to engage the North.

Last week, William Burns, director of the U.S. Central Intelligence Agency (CIA), made his first visit to Seoul since taking the post and met with Moon Friday, discussing the Korean Peninsula situation.