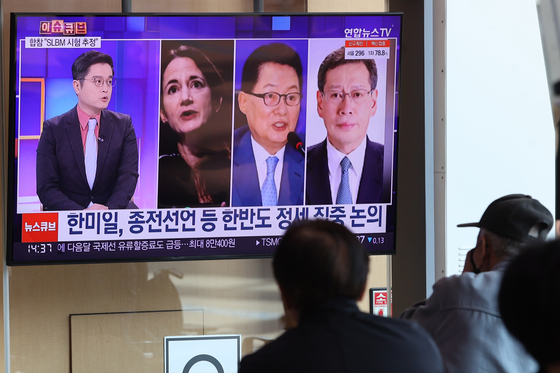 News broadcast at Seoul Station on Tuesday afternoon reports on the meeting among intelligence chiefs of Korea, Japan and the United States in Seoul earlier in the day. [YONHAP]


The intelligence chiefs of Korea, the United States and Japan met in Seoul Tuesday to discuss the latest missile launch by North Korea, said the National Intelligence Service (NIS).

These included current issues with North Korea, including its ballistic missile launch on Tuesday morning, as well as issues surrounding the global supply chain and tech-industry leaks, according to the NIS, adding that the three chiefs “agreed to further strengthen their information cooperation.”

Haines flew into Seoul on Sunday and met with Park on Monday. Park and Takizawa also held a separate meeting the same day.

Cooperation on the global supply chain and technology has been emphasized in both Korea-U.S. and U.S.-Japan summit statements in April and May — areas that the U.S. government has officially promoted as important in improving U.S. competitiveness in its trade relations with China.

The three intelligence chiefs were also expected to discuss the Korean government’s initiative to declare an end to the 1950-53 Korean War, according to the Foreign Ministry.

It’s been an agenda of the Moon Jae-in government to formally put an end to the war, an initiative the president repeated during his address to the United Nations General Assembly last month.

The intelligence chiefs were also expected to have discussed options for dialogue with the North, as the Joe Biden administration since its North Korea policy review in April has repeatedly communicated to Pyongyang that it is open for talks on a number of top agendas between the two, including complete denuclearization of the Korean Peninsula.

The trilateral intelligence chiefs’ meeting was the first in five months, after they last got together in Tokyo in May.