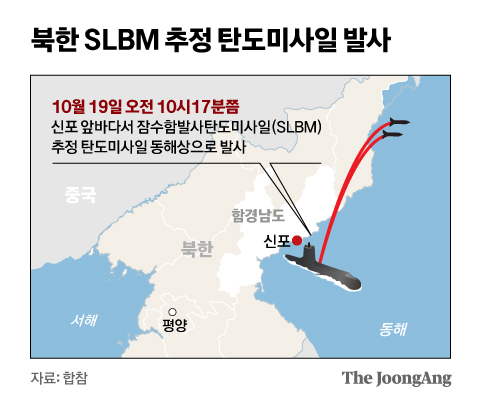 The JCS said that “one unidentified ballistic missile” was launched at around 10:17 a.m. from the vicinity of North Korea’s eastern port city of Sinpo, South Hamgyong Province, toward the East Sea.

No further details on the launch were immediately available.

A military official raised the possibility that the launch could be a submarine-launched ballistic missile (SLBM) based on the location it was fired from. A naval base is located in Sinpo.

The range of the ballistic missile is estimated to be around 450 kilometers.

South Korean and U.S. military authorities are analyzing the height and range of the projectile.

"Currently, our military is maintaining a readiness posture in preparation for possible additional launches while closely monitoring related trends through close cooperation between South Korea and the United States," said the JCS.

This is the North’s eighth confirmed weapons test this year, including the launch of a new hypersonic missile last month.