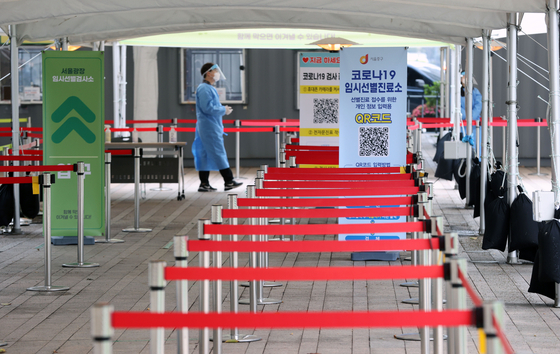 A temporary Covid-19 screening clinic in front of City Hall in Jung district, central Seoul, is having a slow day on Tuesday. As the nation's vaccination rate rises and the number of daily new cases steadily declines, Korea's fourth wave of the pandemic is nearing an end. [YONHAP]


New Covid-19 case counts are waning, signaling an end to the fourth wave that began in July.

Hospital beds are freeing up as well.

As of Monday, 590 beds or 55.9 percent of all beds in intensive care units were unoccupied. In August, when the country was in the middle of the fourth wave, 36.7 percent of the beds were vacant, according to the Korea Disease Control and Prevention Agency (KDCA).

The rise of empty hospital beds outside of ICUs is partly due to more patients receiving Covid care at their homes instead of medical facilities.

Of the 1,050 who were newly diagnosed with the virus on Monday, 205 patients are getting Covid-19 treatment at home.

At-home Covid-19 care started in September and is expanding nationwide.

It is available to patients under the age of 79 who show mild or no symptoms.

With two health assessments per day and extensive Covid-19 treatment kits, the patients are closely monitored by designated medical personnel.

The total number of patients receiving at-home treatments now stands at 2,627. The majority reside in the greater Seoul area.

While the number of cases dropped, the daily death toll of the virus actually hit an all-time high, with 21 deaths on Monday, according to the KDCA.

Park Hyang, head of the quarantine team of the Central Disaster Management Headquarters, explained that the spike in fatalities was the result of a lag effect from the surge of cases in late last month.

“Most who died had been fighting the virus since September,” said Park.

The 21 deaths consisted mostly of people in their 70s and 80s and included six breakthrough infections, or of people who were vaccinated.

Health authorities pointed to a rise in young people’s vaccination rates as the main reason for the daily case drop.

New social distancing rules for the greater Seoul area that took effect Monday allow casual meetings of up to eight people, four of whom have been fully vaccinated for over two weeks.