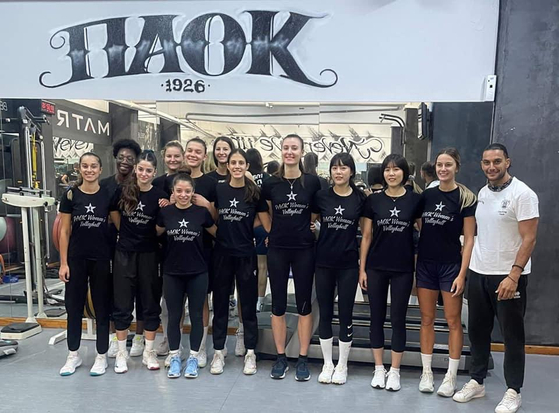 The pair flew to Greece on Oct. 16 after obtaining work visas from the Greek Embassy in Seoul on Oct. 12. PAOK celebrated their arrival on its social media channels with a series of posts and videos.

The sisters left Korea's V League after being embroiled in a scandal in February when a former middle school teammate of the pair accused them of being bullies when in school, listing 21 specific allegations including claims that one of the sisters threatened her with a knife. The Korean national team indefinitely suspended the pair and also banned them from ever holding coaching positions.

As effectively free agents, the sisters received an offer from PAOK Thessaloniki, but required an International Transfer Certificate (ITC). An ITC can be granted only by the Korea Volleyball Association or Fédération Internationale de Volleyball (FIVB) under the assumption that all parties; the players, the original club, the potential club and the association, agree on their transfer.

However, the FIVB didn't accept that justification and issued an ITC for the pair.

PAOK Thessaloniki is a club in the first division Greek volleyball league, A1 Ethniki. The season started on Oct. 9.

Lee Da-young will likely come on the court first for her debut, but with the three-person quota for players from overseas, it is not clear yet when Lee Jae-young will play her first match.