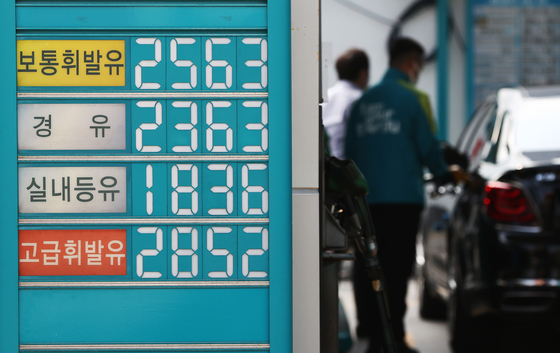 A customer pumping fuel into a car at a gas station in Seoul on Tuesday that is selling gasoline at 2,563 won per liter. The government is considering of cutting fuel taxes to ease burden amid fear of inflation. [YONHAP]

Finance Minister Hong Nam-ki said the government is looking into lowering fuel taxes to help the public after a surge in international crude prices.


“As the significantly increased gasoline prices recently could have an impact on the real economy, the government is currently looking into lowering fuel taxes,” Hong said during a National Assembly audit of his ministry on Wednesday. “International oil prices are at their highest levels since October 2018 and it seems unlikely that oil prices will fall anytime soon.”

Hong said the government might adopt a system it used in 2018.

Between November 2018 and May 2019, the government temporarily cut fuel taxes 15 percent as international oil prices spiked above $80 per barrel.

The cut was later reduced to 7 percent for an additional three months.

If the government decides on a fuel tax cut, it will be the fourth ever.

Earlier the government denied reports that it was considering such cuts.

During the audit on Wednesday, Hong said the government denied it earlier to prevent any major confusion in the market.

“We will soon present our decision,” Hong said.

Inflation triggered by rising oil prices has become an overnight problem for Korea.

International crude prices are trading around $80 per barrel, the highest level in three years.

That’s more than double than a year ago, when international crude prices were around $35 per barrel.

The impact of rising crude prices is being felt at gas pumps and throughout the economy.

As of September, consumer price grew more than 2 percent for the sixth consecutive month.

Rising international crude prices were the main reason for the higher prices in September.

Compared to a year ago, gasoline prices rose 21 percent in September, while diesel price were up 23.8 percent. Liquefied petroleum gas (LPG) for automobiles was up 27.7 percent.

Manufactured goods rose 3.4 percent, the sharpest increase in more than nine years. The last time those prices grew at such a rate was in May 2012, when they increased 3.5 percent.

Better-than-expected tax collections this year have given room to the government to lower taxes on oil.

In the first eight months of this year, the government collected 240.2 trillion won ($200 billion) in taxes, 53.3 trillion won or 29 percent more than a year earlier.

The government previously estimated that it would collect 30 trillion won more.