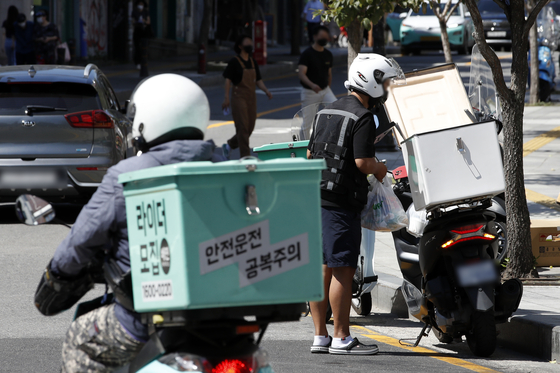 Delivery riders on a street in Seoul on Sept. 15 [NEWS1]


Korea had more delivery workers than teachers in April, according to a recent report by Statistics Korea.

This is mainly due to the at-home shopping delivery boom amid the pandemic as more people have become reluctant to go out and tend to order more online.

That’s 16th largest job category in Korea in terms of the number of workers, exceeding teachers of elementary, middle and high school students and those who work in IT. There were 409,000 teachers and 364,000 IT experts in Korea in April.

“The statistic was only based on people delivering full-time, so the number is likely to be higher considering people who do the job as a side job for extra money,” according to the report. “The number of delivery workers in Korea is likely to increase further.”

This is mainly due to the government’s push to create public jobs for the elderly. Elderly were mostly hired as sanitation workers and dolbom workers, who take care of the elderly and others, which roughly translates as caregivers.

The number of dolbom workers and people in healthcare services increased to 591,000 from 532,000 in the same month a year earlier.

The number of workers in face-to-face services decreased the most.

The number of salespeople in stores declined 10 percent to 1.75 million. People working in restaurants, cafes and bars numbered 523,000, down 4 percent on year.

"The number of workers who received less than 1 million won is on the rise as more women and elderly were hired as part-time workers," said Kim Kyeong-hui, head of the employment statistics department at Statistics Korea.

April was the first month in which the percentage of those earning less than 2 million won a month fell below 30 percent since 2013, when the statistics agency started collecting related data.

In April in 2013, around 51.6 percent of all people working in Korea received less than 2 million won in salary monthly.

Of all workers who received 1 million won or less, 27.5 percent were food and accommodation workers and 23.7 percent worked in the agriculture, forestry and fisheries category.

Some 62.1 percent of people working for food and accommodation businesses received less than 2 million won monthly.