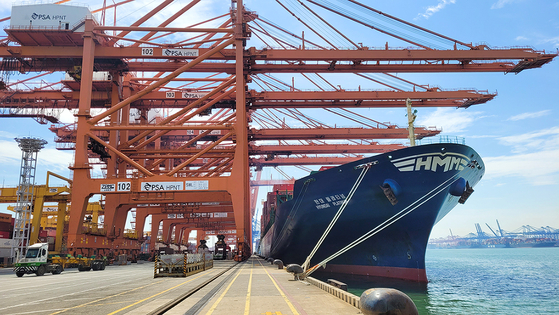 A 5,000 twenty-foot-equivalent unit (TEU) container carrier that will be deployed for the new route connecting Korea and Latin America in December. [HMM]

It will take 84 days for the container vessel to make a round trip.

Major stops for the route include Shanghai and Ningbo in China, Singapore, Durban in South Africa, Santos and Paranagua in Brazil, Buenos Aires in Argentina and Montevideo in Uruguay.

Through the opening of the new route, HMM said it will provide “a stable and higher quality service” to domestic and international exporters. “We plan to maximize profit by solidifying our position in Far East India-Latin America routes,” it added.

The new route is not part of THE Alliance, which is one of the major alliances in which HMM participates.

Hapag-Lloyd, Yang Ming and Ocean Network Express are other members of THE Alliance.