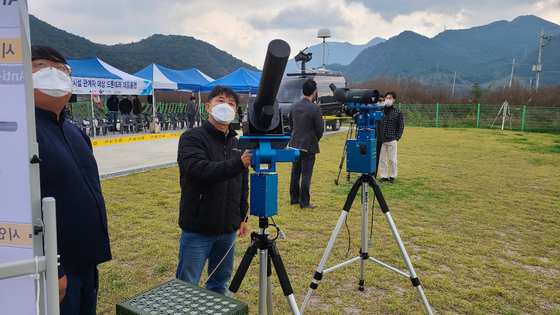 An anti-drone jamming gun is tested at a training hosted by the National Intelligence Service and the Ministry of Land, Infrastructure and Transport in Yeongwol County, Gangwon, on Tuesday. [YEONGWOL COUNTY OFFICE]


Korea Hydro & Nuclear Power Company (KHNP), the largest electricity generator in the nation, will be installing an anti-drone system as early as next month to jam illegal drones flying in the area.

“Within this year, we will deploy [anti-]drone guns [jammers] for some of the hydro power plants and for all of the nuclear power plants,” an official of the KHNP told the JoongAng Ilbo on Monday. “We still have some regulatory processes to go through, so it may take some time.”

The use of radio frequencies to jam drones for security purposes was legalized in Korea through an amendment of the Radio Waves Act in June 2020.

The KHNP, which generates nearly 30 percent of the total electricity generated in Korea, is scheduled in November to install two guns that can commandeer drones in the air by jamming their signals. The drones would be forced to hover until it runs out of battery power and plummets.

The company is not the only one among energy generators worldwide to consider such anti-drone technology. Saudi Arabia’s Abqaiq and Khurais oil facilities sustained drone attacks in 2019 and since then has been ramping up its anti-drone security system.

In Korea, at least 14 individuals were caught by police for flying drones near the Kori Nuclear Power Plant in Busan from August 2019 to June 2020. It is illegal to fly any airborne device including drones and planes within a distance of 3.6 kilometers (2.2 miles) from nuclear power plants.

The Aviation Act also bans flying any airborne devices within 9.3 kilometers of an airport, but there were as many as 179 cases of illegal drone flying detected by Incheon International Airport from September 2020 to August this year, according to Democratic Party Rep. Jo O-seop’s office. Only 33 were fined for breaking the law, however, as the rest of the individuals couldn’t be located by the police.

The airport last July installed a 3.35-billion-won ($2.8 million) system to detect drones near the airfields, but it does not yet include anti-drone gun technology.

The airport, from Sept. 2020 to Sept. 2021, suffered 17 turn-arounds in the air and 17 delays from takeoff due to drones floated in vicinity.

“The anti-drone technology is rapidly growing so that it can even commander drones in addition to providing surveillance, but the technology’s localization rate is slow, with a general lack of empirical data and system standardization,” Rep. Jo said. “The country is in dire need of updates to its anti-drone policies.”

The National Intelligence Service (NIS) on Tuesday hosted a training session for drone-borne terrorist attacks and security breaches in Yeongwol County, Gangwon. It was organized together with the Ministry of Land, Infrastructure and Transport, provincial government of Gangwon, members of the Army and anti-terrorism experts.