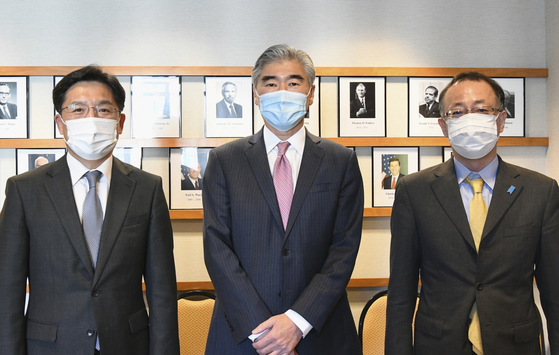 The three nuclear negotiators “reaffirmed their commitment to working trilaterally to reduce tensions and make progress toward the shared goal of the denuclearization of the Korean Peninsula,” said the U.S. State Department in a statement.

Kim emphasized the “U.S. condemnation of the DPRK’s October 18 ballistic missile launch, which violates multiple UN Security Council resolutions,” according to the department, referring to the acronym for the North's official name, the Democratic People's Republic of Korea.

He “called on the DPRK to refrain from further provocations and engage in sustained and substantive dialogue.”

Kim also “expressed support for humanitarian aid for the most vulnerable North Koreans."

A high-ranking South Korean government official said Tuesday that there is “consensus” between South Korea and the United States that a formal declaration of an end to the 1950-53 Korean War will be “very useful as an opportunity to start dialogue with North Korea.”

The official said that South Korea and the United States are discussing “creative ways” to bring North Korea to dialogue, and that the two pillars are trust-building measures, including an end-of-war declaration, and humanitarian cooperation projects.

He added that Seoul and Washington have almost completed working-level discussions on humanitarian support for North Korea, which also requires Pyongyang’s consent, but that further discussion is needed on the timing of implementation.

The U.S. State Department did not make any separate mention of an end-of-war declaration, but Kim told reporters Monday that he and Noh during bilateral talks discussed Seoul’s “end-of-war proposal” and that he looked forward to continuing such discussions in a visit Seoul later this week.

South Korean Foreign Minister Chung Eui-yong said in a parliamentary audit session Wednesday that sanctions relief can be considered as part of efforts to prevent North Korea from developing its nuclear and missile capabilities, “on the condition that the North accepts the proposal for dialogue."

However, the United States has been adamant on enforcing the current sanctions regime on the North to curb its nuclear and ballistic missiles programs.

U.S. Deputy Secretary of State Wendy Sherman likewise said Tuesday the United States has “directly” reached out to North Korea, an indication that Washington also is stepping up its efforts to engage Pyongyang.

Sherman said in a virtual address to the Korea Society in New York, “We have reached out directly to Pyongyang and stand ready to meet without preconditions.”

She stressed that the “United States does not harbor hostile intentions toward the DPRK."

Washington is working closely with its allies and partners "to monitor the situation in the DPRK, and charter a path for complete denuclearization of the Korean Peninsula," she added.

Sherman last visited Seoul in July as a part of an Asia trip which also took her to China.