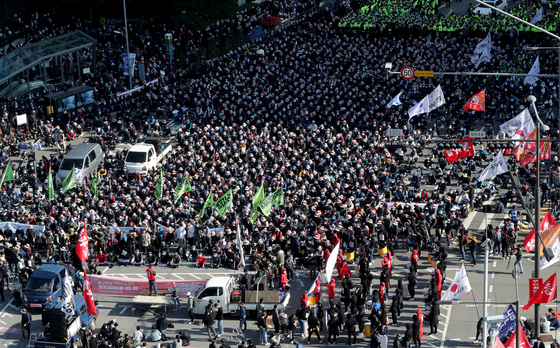 Members of the Korean Confederation of Trade Unions (KCTU) gather near Seodaemun Station in western Seoul, Wednesday, to demand better working conditions for contract workers and a more active dialogue with the government. [NEWS1]


The Korean Confederation of Trade Unions (KCTU), a major umbrella labor group in Korea, pushed ahead with a general strike Wednesday despite the government’s repeated calls to walk back the plan over fears of a possible virus resurgence.

The KCTU staged simultaneous rallies Wednesday afternoon at 14 locations nationwide, including Seoul and Busan, to put a spotlight on labor issues ahead of next year’s presidential election. The union has been demanding the government to end discrimination against small businesses with less than five employees; increase public investment in medical services, education, and housing; and guarantee jobs for laborers during changing times in industry.

Police estimated that some 20,000 would join the Seoul rally, and deployed officers and installed bus walls and checkpoints to block movement from Seodaemun Station toward the presidential office near Sejong-no. Subway trains did not stop at five of Seoul’s major stations, including Jonggak, Gwanghwamun, City Hall, Anguk and Gyeongbok Palace stations, for two hours from 12:30 p.m.

The union previously announced about 500,000 people, or half of its 1.1 million members, would participate in the general strike throughout the country. The actual number was calculated to be around 40,000 to 50,000 — less than 5 percent of the prediction — according to a Ministry of Employment and Labor provisional estimate. Unions from large conglomerates such as Hyundai Motor and Kia Motors, which are the main members of the KCTU, did not participate in the strike.

Most of the participants included non-staff workers at schools and government officials' unions, including school cafeteria and caregivers, provoking some criticism. In the southern city of Daegu, 50 out of 482 kindergartens and schools had to replace normal school meals with snacks such as bread and drinks due to the strike.

Earlier, the government urged the KCTU to cancel its strike and warned that it would respond sternly to any illegal activities.

Under the Level 4 distancing measures in effect in Seoul and neighboring Gyeonggi and Incheon, all types of protests and rallies except for one-man rallies are prohibited. Other areas, which are under Level 3, can only have up to 49 participants.

“At a time ahead of an important turning point toward the recovery of normal life, the KCTU's announcement of a nationwide general strike could threaten the virus situation and dampen expectations for a normal life,” Interior and Safety Minister Jeon Hae-cheol said in a Covid-19 response meeting on Wednesday morning.

"We will take strict measures against such illegal activities in accordance with a zero tolerance policy," he added.

Meanwhile, Yang Kyung-soo, the leader of the KCTU, is currently standing trial on charges of violating the infectious disease prevention act for leading several illegal protests in downtown Seoul.