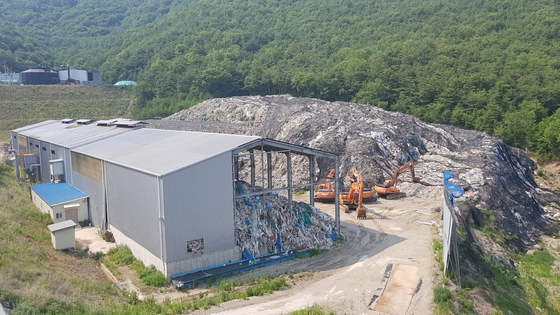 Some 50,000 tons of illegally abandoned waste was spotted in Mungyeong, North Gyeongsang, before it was wiped out in June last year. In place of the trash mountain, a set for a Korean drama series will begin construction next month, according to the local government. [MUNKYEONG CITY]


Backlogged mounds of garbage, otherwise known as trash mountains, across Korea's countryside are being transformed into parks, tourism spots and recreational facilities.

Since coming under global scrutiny in 2019 due to a scathing CNN report about Korea’s trash mountains and its plastic waste problem, local and central governments have invested billions of won into wiping out over 300 mounds for good.

According to the city government of Mungyeong, North Gyeongsang, a Korean drama set for major national television network tvN will be completed next month, in lieu of a 50,000-ton heap of trash which had formed over the span of six years, when a waste company in charge quit without properly disposing of the trash.

“We hope that the drama set will attract tourists and boost the local economy,” said Kim Dong-hyeon, director of tourism promotion of Mungyeong.

The Ministry of Environment and local government spent 11.8 billion won ($9.96 million) to properly dispose of the trash mountain.

Another trash mountain, in Uiseong County, North Gyeongsang, used to be the biggest pile of garbage in Korea, weighing 208,000 tons and 15 meters (49 feet) tall. This is equivalent to a four-story building.

The Uiseong trash mountain was wiped out last February and came with a 28.9-billion-won price tag.

About half of the waste from the trash mountain was reused as fuel for cement factories, and the rest was incinerated or buried in landfills.

The entire wipeout project took 20 months, much less than the five years that was initially projected by the local officials.

Starting next year, the same 48,000-square-meter (11.86 acre) plot of land where mounds of trash used to sit will become a space for an ecological park and educational facility to teach future generations the consequences of neglecting trash.

The Daegu Arboretum is a model success case of a trash mountain site being turned into a popular tourist attraction.

The 247,000-square-meter land area used to be an overfilled landfill for several tons of trash.

But since May 2002, the space has been serving as home to over 1,800 different species of flora and fauna with over 1.84 million visitors annually.

Arboretum authorities say that the ground beneath is still filled with garbage.

Having undergone rapid urbanization, Korea struggles to deal with the large amounts of trash that are being generated every day.

As landfills fill up, incinerators are being shut down due to surging smog levels, and countries like China and the Philippines no longer receive waste imports, the country faces a ballooning trash crisis which has led to an increase in illegal waste dumping and the formation of trash mountains.

As of 2019, there were 1.61 million tons of illegally abandoned waste in Korea, according to an investigation by the Ministry of Environment.