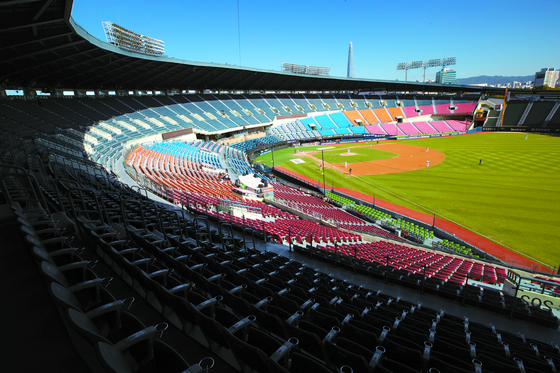 
The end of the 2021 KBO regular season promises to be as dramatic as any other year, with seven teams still in contention for five playoff spots as of 6 p.m. on Wednesday.

With just over a week left before the regular season ends on Oct. 30, the KT Wiz hold on to an increasingly tenuous lead at the top of the KBO, now just 1.5 games ahead of the second-place Samsung Lions.

The LG Twins round off the top three, only a game behind the Lions and still well within contention of the No. 1 spot.

A likely unassailable gap follows to the Doosan Bears in fourth place, five games behind the Twins. Two games behind the Bears sit the NC Dinos, Kiwoom Heroes and SSG Landers, all tied in fifth place, the KBO's Wildcard spot.

The eighth-place Lotte Giants are three games behind the fifth-place teams, meaning that a catastrophic failure from all three clubs could theoretically throw the Giants back into contention. At the bottom of the table, the Kia Tigers and Hanwha Eagles are way out of the race, a solid 18 and 24 games behind the Wiz.

The number of games left to play is going to be a huge factor going into the final week. The KBO is currently in the middle of a three-week appendix to the regular season as teams make-up games that were canceled during the regular season due to rain, pollution or Covid-19.

The league always tries to skew these make-up fixtures to ensure that the gap between the number of games left to play for each team narrows as it gets closer to the final day, ensuring that all clubs play their final game of the regular season on the same day — in this case Oct. 30.

This isn't always a perfect science — last year the Dinos faced the Tigers in an entirely meaningless game on Day -1 — but if there are no more rain cancellations this year, all 10 teams will end simultaneously.

When taking into account the number of games left, the second-place Lions suddenly appear to be in a much weaker position. While the Wiz have nine games left to play — the average across all 10 teams — the Lions only have six, the lowest of any club. The third-place Twins, on the other hand, have nearly double that, with 11 games left to play.

The fourth-place Bears have 10 games left to play, enough to take a huge chunk out of the gap between them and the Lions.

Taking into account the number of games left, the fifth-place face-off should be the Dinos' to win. Like the Twins, the Changwon club and KBO reigning champions have 11 games left to win, well ahead of the eight games that both the Heroes and Landers will play.

The Dinos always have a much easier draw, playing four of their games against the Tigers, while the Heroes only have two games against either of the bottom two teams and the Landers have none.

Adding to the excitement of the final week, fully vaccinated baseball fans in parts of the country under level four were able to return to stadiums from this week. 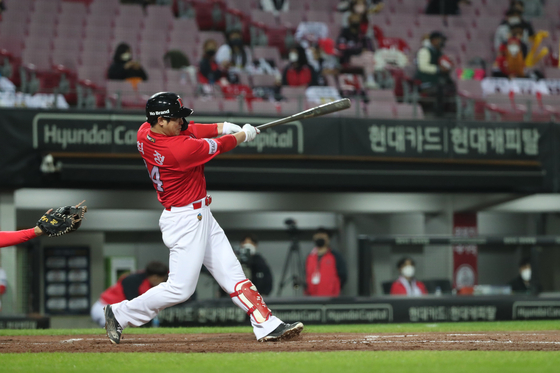 Choi Jeong of the SSG Landers hits his 400th career home run in a game against the Kia Tigers at Kia Champions Field in Gwangju on Tuesday. [YONHAP]


The KBO also saw a huge milestone passed on Tuesday night, when Choi Jeong of the Landers became only the second player in league history to pass 400 career home runs. Choi, 34, is still on track to surpass the 467 record set by Lee Seung-yuop, the former Lions great.

Just three games are set to be played on Wednesday as of press time: The Heroes will face the Twins, the Dinos will take on the Landers and the Wiz and Tigers will face off in Gwangju.

On Thursday, the Heroes will continue their run against the Twins, the Bears will visit the Landers in Incheon for back-to-back games and the Eagles will take on the Tigers.