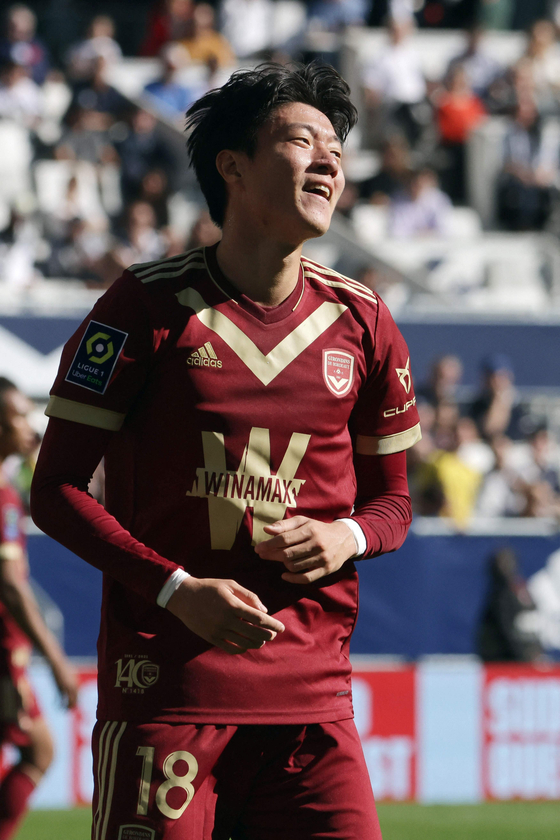 Bordeaux' Hwang Ui-jo reacts during a match against Nantes at the Matmut Atlantique Stadium in Bordeaux on Sunday. [AFP/YONHAP]


FC Bordeaux forward Hwang Ui-jo appears to have avoided any serious damage in an injury during a game on Sunday, with French media reporting Tuesday that the Korean star sprained his ankle and shouldn't be out of action for too long.

Hwang appeared for Bordeaux in a 1-1 draw against Nantes on Sunday, scoring his side's only goal in the 62nd minute before leaving the pitch in the 75th minute with an ankle injury.

Hwang left the game on Sunday after he appeared to twist his ankle after a block. French newspaper Sud Ouest reports that Hwang's ankle has since been checked and there is no sign of any serious ligament damage. Despite the positive news, Hwang is unlikely to appear for Bordeaux against Lorient on Sunday.

Although the injury cast a shadow over the game, Hwang's goal, a huge shot across the goal from outside the box, made Ligue 1's best goals of the week.

Hwang is off to another fast start with Bordeaux this season, scoring four goals and picking up one assist in nine games for the French club. Hwang's success has not translated to the rest of the team, which is currently sitting just outside the regulation goal in 17th with just one win, five draws and four losses on the season so far.

Hwang was Bordeaux's top scorer last year, with 12 Ligue 1 goals in 36 matches, a record he could break this year if he is able to keep up his current pace. He was at the center of transfer rumors throughout the summer the cash-strapped club apparently considered offloading the star player to make some money. No deal was reached despite a last-minute rush and Hwang stayed in Bordeaux this season.