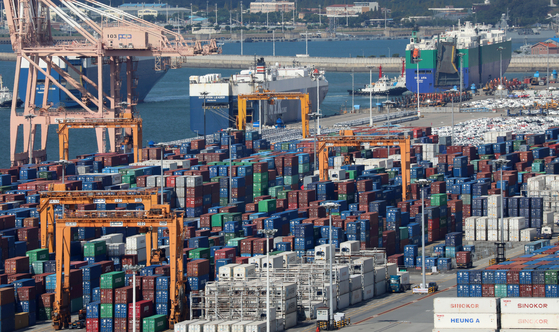 Containers are stacked at the Pyeongtaek Port in Gyeonggi on Oct. 14. [NEWS1]

Many countries, including Korea, the United States, Australia and Peru, are suffering due to the shortage of labor in ports since the Covid-19 outbreak, as well as surging freight rates.

“Price increases will be inevitable for a while,” said Lee Sang-hoon, a seafood buyer at Emart.

The price of octopus from Mauritania increased by 20 percent on year.

Fruit prices are also unstable. Korea usually imports fruit from South America and Australia. It normally takes about four weeks for local retailers to receive the orders, but now it takes about six to eight weeks.

A local discount mart, which was scheduled to sell Australian oranges starting from the beginning of September, began selling them in mid-October due to the delayed arrivals.

Retailers are already facing a shortage of Peruvian avocados. It generally takes four to seven days for a hard avocado to fully ripen. As they stay longer in containers, they arrive as fully ripened — sometimes rotten.

Fashion has been hit hard. Fashion companies are having a hard time buying enough winter items as they usually have their manufacturing plants in overseas in China and Vietnam.

“It seems like the demand for products for winter and spring will likely exceed the supply that we can afford,” said a spokesperson for Nike Korea.

Eland, which has a plant in Ho Chi Minh City, Vietnam, has started operating plants in Korea more to cover the orders for fall and winter seasons.

Other fashion brands, like LF, Fila and Samsung C&T’s fashion division, that have plants overseas are also scrambling to operate plants locally.

“We barely secured sufficient quantity for the second half, but the first half of next year will be more problematic,” said a source from the fashion industry. “It usually took only one week to receive the shipments, but it takes three or four days more these days.”