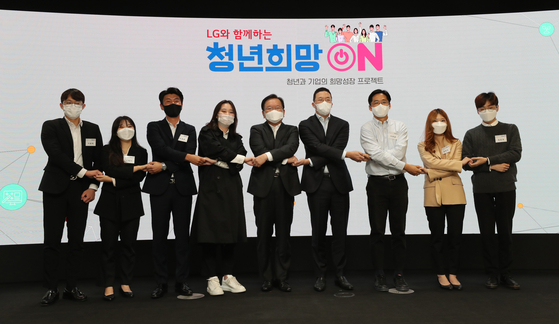 
LG will recruit 30,000 new employees over the next three years, the group said on Thursday after chairman Koo Kwang-mo met with Prime Minister Kim Boo-kyum at the LG Science Park in Magok, western Seoul.

LG signed an agreement with the government on Thursday. It is the third to join the government’s ongoing “Youth Hope ON” project, after KT and Samsung Electronics.

The project is led by the prime minister's office, which funds the education fees for job seekers, and the partnering company hires more recruits than usual.

On Thursday, LG promised to make 30,000 new direct hires and create 9,000 jobs outside of the company by investing in start-ups, expanding its partnerships with universities and financially supporting local companies.

A total of 150 billion won ($127.5 million) will be invested in start-ups to help them create 2,000 jobs over the next three years. It will also expand the number of university majors that the company funds and consequently hire 5,800 more employees in the future.

Local companies will be funded more through LG's social contribution programs, such as the LG Social Campus project and the Local Value-up Program, through which 1,200 jobs are to be created.

“We are increasing the number of hires by 10 percent, despite having terminated our smartphone business and splitting off LX Group, in our effort to create more jobs for the youth,” LG said in a statement.

The prime minister thanked LG for its participation in the government’s endeavors to add jobs.

"I am so grateful that LG has taken part so generously,” Kim said.

Kim said that the government will announce additional projects and policies to create more jobs for younger people.

The government has added 81,000 potential workplaces for the next three years so far through the “Youth Hope ON” project.

Earlier this month, KT’s CEO Ku Hyeon-mo promised to hire 12,000 more employees over the next three years in a meeting with Prime Minister Kim on Oct. 7. On Oct. 14, Samsung Electronics said it will recruit 30,000 more people during the same period.