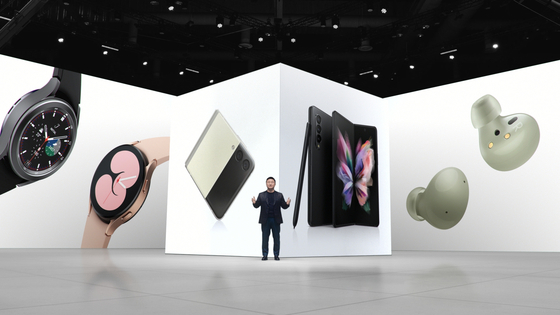 Since first unveiled at the Samsung Unpacked event in August, the Galaxy Z series has far surpassed market expectations, according to Samsung Electronics. During a seven-day presale period from Aug. 17 to 23, the Z series drew over 920,000 preorders.

Foldable smartphones are quickly going mainstream, said Samsung Electronics. Taking a huge leap forward from the previous foldable models, the tech giant’s third-generation foldables have gone up a notch in terms of design, functionality and durability.

Though the Z Fold 3 and the Z Flip 3 both fall under the category of foldables, they are distinctive from one another in various aspects including shape and size. While the Z Fold 3 unfolds to reveal a tablet-like wide screen, the Z Flip 3 is folded horizontally like a flip phone or a clamshell and fits comfortably in one hand.

The Galaxy Z Fold 3 is built as a “productivity powerhouse,” Samsung said.

The main screen’s 7.6-inch Infinity Flex display allows a broader space for multitasking. The smartphone maker also adapted the first ever S Pen support for a foldable device to the Z Fold 3 to boost productivity.

The Galaxy Z Flip 3’s strength, on the other hand, lies in the sleek design and compact size.

Backed by the younger generation, especially women in their 20s and 30s, the Galaxy Z Flip 3 is driving the Z series’ popularity in Korea. The Z Flip 3 accounts for some 70 percent of domestic sales of the Galaxy Z series, according to Samsung Electronics. Over half of domestic buyers were from Millennials and Gen Z.

While the Galaxy Z Flip 3 is packed with innovations, its re-designed cover screen is definitely the eye-catcher.

The cover screen, which is four times larger than the previous model, is one of the key features of the Z Flip 3. The 1.9-inch Super Amoled display can be utilized for a variety of functions, from checking notification to media playback, by simply swiping left or right. 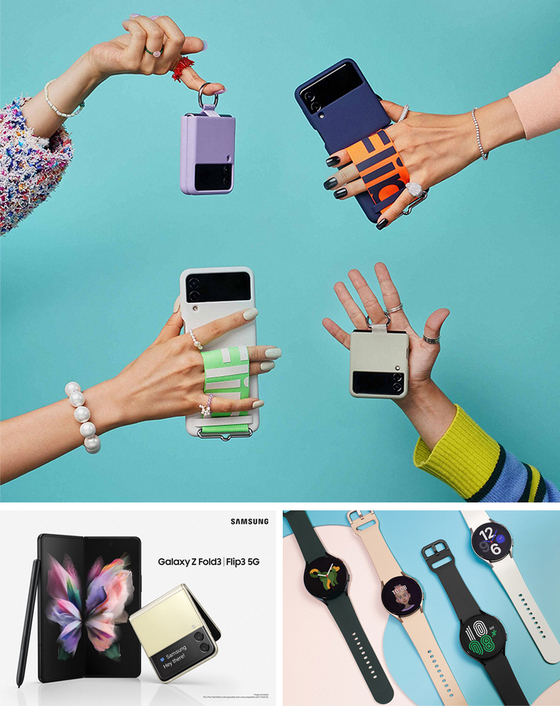 Clockwise from top: The Galaxy Z Flip 3 comes in a range of colors with unique accessories; the Galaxy Watch 4 series is thinner and more chic than its predecessor; the category-defining Galaxy Z Series is a huge success worldwide, exceeding market expectations. [SAMSUNG ELECTRONICS]


Users can also display a picture or wallpaper on the cover screen, which makes the Galaxy Z Flip 3 the perfect foldable device for self-expression.

Furthermore, the overall exterior is sleeker, as Samsung arranged both the cover screen and camera into a single black area. The rest of the cover is smooth and colored, adding style to the chic simplicity.

The continuity between the black and colored areas completes the soft two-tone look that makes the Z Flip 3 stand out.

Another attractive factor of the Galaxy Z Flip 3 is the functionality that does not compromise on style, said Samsung Electronics.

The Galaxy Flip 3’s user experience flows seamlessly and is designed to be more streamlined with One UI 3.1.1, Samsung’s most intuitive user interface for foldables so far, which also comes with the Z Fold 3.

Packed with a range of cutting-edge features, the Galaxy Z Flip makes content creating and sharing easier than ever. Users can use the camera for live broadcasting or filming vlogs by just propping up the device.

On top of that, the rear dual camera embedded in the front of the cover screen can be used to take fun selfies, even without unfolding the device.

The Galaxy Z Flip 3 is built to last as well, made with Samsung’s new Armor Aluminum frame and equipped with IPX82 water resistance, a first in foldables.

The Galaxy Z Flip 3’s iconic style is what caught the eye of the younger generation the most. As self-expression is more than just a trend now, users express their uniqueness through the smartphone design and accessories.

In keeping with the growing demand for self-expression, Samsung rolled out a variety of phone cases for the Z Flip 3, adding a touch of originality with diverse accessories such as silicon straps and ring grips.

Aside from the four basic color options of cream, lavender, green and phantom black, the device also comes with the exclusive pink, grey and white colors, available through Samsung.com.

“With the Galaxy Z Fold3 and Z Flip3, Samsung is once again redefining the possibilities with foldable smartphones that empower users with the flexibility and versatility needed for today’s fast-paced world,” said Roh Tae-mun, president and head of the mobile communications business at Samsung Electronics.

“As a pioneer and industry leader in the foldable category, we’re proud to build on our legacy of innovation with the Z Fold3 and Z Flip3. These devices equip consumers with technologies that unlock new ways to maximize and enjoy every moment with an ecosystem built on openness and innovation.”

Apart from the foldable smartphones, another recent hit for Samsung Electronics is the Galaxy Watch 4 and Galaxy Watch 4 Classic, unveiled in August at the Samsung Galaxy Unpacked event alongside the Galaxy Z series.

The Galaxy Watch 4 series, the latest model of the Samsung Galaxy Wearable smartwatch, is equipped with advanced hardware performance and the most intuitive UI for a smartwatch yet, the company said.

“The Galaxy Watch series has been empowering millions of users to access detailed insights into their overall health for years,” said Yoon Jang-hyun, executive vice president and head of the software platform team of the mobile communications business at Samsung Electronics.

“Now, we have equipped our new Galaxy Watch 4 with our most advanced sensor technology ever in order to deliver our most comprehensive health experience yet.”

The exterior has been improved as well as the interior. The Galaxy Watch 4 series became thinner and slimmer, elevating the user’s style paired with a variety of straps and customizable watch faces.