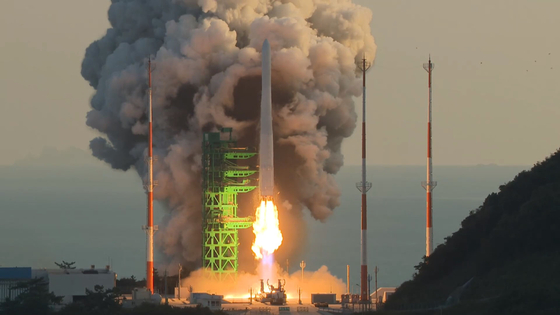 A three-stage, liquid-fueled KSLV-2 rocket lifts off from the Naro Space Center in Goheung County, South Jeolla, at 5 p.m. on Thursday. [YONHAP]


A carrier rocket using homegrown technology successfully blasted off Thursday, but a dummy payload failed to stay in the targeted orbit.

The launch was a major milestone in Korea’s efforts to develop its own space technology, but the mission wasn't a complete success.

The Science Ministry initially set the launch time of the Korea Space Launch Vehicle-II (KSLV-2), also known as the Nuri-ho, for 4 p.m. Thursday, which was postponed to 5 p.m. due to problems linked with the rocket’s parts, including valves.

The three-stage, liquid-fueled KSLV-2 rocket was supposed to send a 1.5-ton mock payload into a low orbit, around 700 kilometers (435 miles) above the Earth.

The space vehicle lifted off from the Naro Space Center in Goheung County, South Jeolla, at 5 p.m., followed by the separation of the first stage booster 127 seconds after the launch at an altitude of 59 kilometers. The first-stage was fitted with four 75-ton liquid fuel engines.

A cover surrounding the dummy satellite was split off after 233 seconds at an altitude of 191 kilometers.

When 274 seconds passed, the second-stage booster, equipped with a 75-ton liquid fuel engine, fell away at an altitude of 258 kilometers.

The third stage booster and the payload separated but the payload failed to stay in the targeted 700 kilometer orbit.

The entire flight took 16 minutes and 7 seconds.
"An engine installed in the third-stage booster lasted less than it was supposed to be, which gave less propellent power to the dummy satellite," said Science Minister Lim Hye-sook during a briefing after the launch.

“From the liftoff at the space center to the ignition and separation of engines and split of the dummy satellite, the processes were successfully carried out,” said President Moon Jae-in during an earlier briefing.

“But the fact that the dummy satellite failed to settle in the [right] orbit makes the project incomplete,” the president said.

The state-run Korea Aerospace Research Institute spearheaded the effort to design, build, and test the Nuri rocket, with help from private companies.

The government is banking on the project to become a catalyst for private space companies and enhance the overall competitiveness of the industry.

Over 300 companies participated in the project led by Korea Aerospace Industries, Korea’s sole aircraft manufacturer. Hanwha Aerospace took the lead in supplying the engine and other parts including valves and propellant pumps, while Hyundai Heavy Industries spearheaded the development of the launch pad. Doowon Heavy Industrial played a major role in building the rocket’s frame.

President Moon pledged to keep strengthening Korea’s competitiveness in the space sector.
Another area to be focused on, he said, will be lunar exploration.

Korea agreed to join a U.S.-led lunar exploration mission called Artemis Accords earlier this year.
The agreement was part of extended cooperation in space and satellites discussed by Moon and U.S. President Joe Biden in a Washington summit in May.

Korea is the tenth country to commit to the international agreement drafted by NASA. U.S. allies including Japan, United Kingdom and Canada made the commitment last year.

With the signing of the accord, Korea will engage in research for the Artemis Program, NASA’s lunar exploration mission aimed at landing the first female astronaut and a male astronaut on the Moon by 2024.