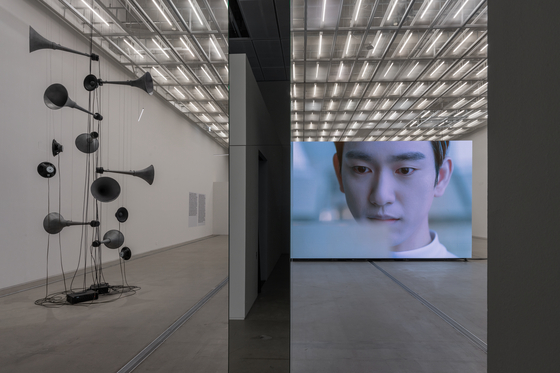 ″News from Nowhere - Freedom Village″ (2021) by Moon Kyung-won and Jeon Joon-ho now on view at the MMCA Seoul. [MMCA]


REVIEW - Two gigantic high-definition displays stand back to back in Gallery 5 of the National Museum of Modern and Contemporary Art (MMCA) Seoul. One display shows a fictional story of a nameless young man, played by movie star Park Jung-min, living in "Freedom Village," a real village isolated in the Demilitarized Zone (DMZ) between the two Koreas. On the other display unfolds a fictional story of another nameless young man, played by boy band Got7’s Jinyoung, isolated in a futuristic spaceship-like place. The two men vaguely perceive each other’s existence as if they were in overlapping and interacting parallel universes.

The two-channel film is the newest work belonging to “News from Nowhere,” a long-term collaborative project by famous Korean artists Moon Kyung-won and Jeon Joon-ho. Inspired by a utopian novel of the same title written by British designer and socialist activist William Morris (1834-1896), the “News from Nowhere” project, for the last decade, has been exploring the social roles and future of contemporary art through films, installation works, multi-disciplinary research and publications.

The duo’s ongoing exhibition titled “News from Nowhere: Freedom Village,” sponsored by the annual “MMCA Hyundai Motor Series” program, encompasses the two-channel fiction film, documentary video works mixed with fiction, photographs and a large-scale painting. All of them are based on research about "Freedom Village," which is the only village that lies on the South Korean side of the DMZ.

The existence of the village itself is stranger than fiction. It does not even appear on car navigation systems. It has been under the jurisdiction of the United Nations Command in South Korea since the 1953 Armistice Agreement after the Korean War.


“Ironically, we are not free to enter the ‘Freedom Village;’ it has a strict limit on entering and exiting town,” Jeon explained. “About 200 people living in the village are compensated for their isolation with exemption from military duties and national income tax. The residents have to choose whether to remain in or leave the village when they reach the age of 32. Man A [played by Park Jung-min] in the film has just decided to remain in the village.”

“[With this film], we want to talk about the deformed situation of the village that has resulted from the confrontation and tension of human history — not only from the unique political situation of the Korean Peninsula,” Jeon added.

In the two-channel film the man called “A” by the artists flies his plant collection in a balloon to overcome the sense of isolation and to communicate with an unknown someone, while he voluntarily remains in the village. The man called “B,” who seems to be forced to remain in the futuristic spaceship-like place, discovers the plant collection and, inspired by it, decides to escape.

The film, which is the highlight of the exhibition, is like a music video without music, in both positive and negative senses. Except that it is a two-channel film and offers the audience a new way of viewing — such as repeatedly moving round the two displays, the film gives no shock of new. The film delivers visual pleasure and familiar messages such as isolated humans’ struggles to communicate and hopes of communication and of a change, just like well-made music videos.

The film would have easily appealed to the general public even with unknown actors, instead of Park Jung-min and Got7’s Jinyoung. Featuring the stars, who appeared in the film without pay so as to support art, gave the artists more room to do avant-garde experiments but the result is not so experimental. In addition, the film’s structure is similar to “El Fin del Mundo”(2012), an earlier work of the artists’ “News from Nowhere” project. It is also a film that consists of two channels, which respectively feature famous movie stars Lee Jung-jae and Lim Soo-jung. 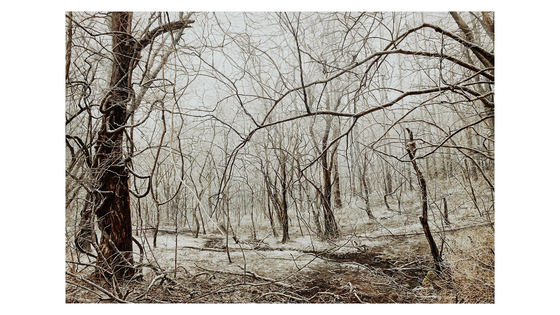 ″News from Nowhere - Freedom Village″ (2021) by Moon Kyung-won and Jeon Joon-ho now on view at the MMCA Seoul. [MMCA]


“News from Nowhere” is a meaningful project. The new chapter of the project — this exhibition — has lyrical beauty and could heal people suffering from isolation during the pandemic. In addition to the two-channel film, the exhibition also includes videos in which documentary and fiction is mixed, photographs and an impressive large-scale painting made by Moon that depicts the landscape of the forest in which man A wanders in the film. Still, the exhibition seems to be generally light, compared to the weight of the Freedom Village itself, which is stranger than fiction and has many layers of meaning.