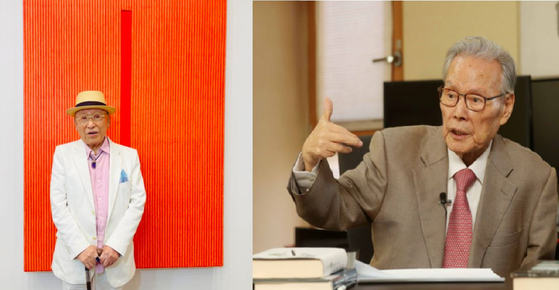 Artist Park Seobo, left, and former Culture Minister Lee O-young, have been named as recipients of this year's Geumgwan (Gold Crown) Order of Cultural Merit, awarded by the Ministry of Culture, Sports and Tourism. [JOONGANG ILBO]


Dansaekhwa painter Park Seobo and former Culture Minister Lee O-young have been named as the recipients of the Korean government’s Geumgwan (Gold Crown) Order of Cultural Merit, the highest honor in the annual order of cultural merit awards.

The Ministry of Culture, Sports and Tourism announced on Thursday a total of 17 recipients of this year’s orders of cultural merit, which recognize those who have played a significant role in promoting the culture of Korea and their outstanding services in the fields of culture and arts.

Park, 89, is a world-renowned artist known as one of the pioneers of dansaekhwa, or Korean monochrome painting. According to the ministry, Park has “contributed to the development of Korean art around the world, serving not only as an artist but as a professor at Hongik University and the president of the Korean Art Association. He is indeed a kingpin of Korea’s art world.”

Lee, 87, was recognized for “contributing greatly to the development of Korean literature as a poet, a writer, an educator and a literary critic.” He is currently a professor emeritus at Ewha Womans University and a senior advisor to the JoongAng Ilbo, an affiliate of the Korea JoongAng Daily.

“Through an array of publications, he has suggested cultural directions according to the changing times and nurtured numerous students while serving as a professor,” the ministry said.

Two more Korean artists will also be receiving honors. Kim Byung-ki, Korea’s first-generation abstract artist has been named as one of the recipients of the second-highest Eungwan (Silver Crown) Order of Cultural Merit, while ceramic artist Kwon Dae-sup, who is well known in the world for his moon jars, will receive the fifth-class merit Hwagwan (Flower Crown) Order of Cultural Merit.

The awards ceremony will be held Friday at the National Theater of Korea in central Seoul.