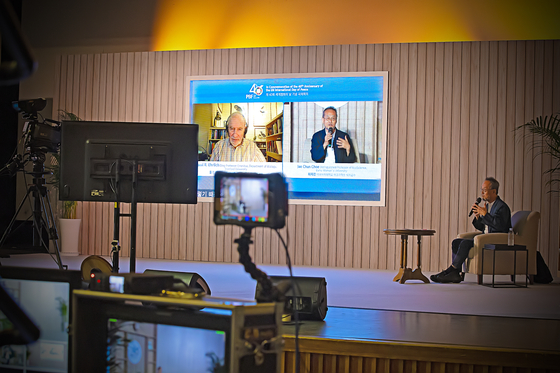 Professor Choe Jae-chun, right, speaks during the second dialogue session of Kyung Hee University System’s Peace BAR Festival at Kyung Hee University on Oct. 15 under the theme of “Are Homo Sapiens Destined to be Trapped in the Myth of Unlimited Growth or Do They Have the Potential to Transform Themselves?” He is joined virtually by Dr. Paul R. Ehrlich. [KYUNG HEE UNIVERSITY SYSTEM]


Earth's capacity to support the coexistence of humans and nature may be nearing its breaking point, and scholars discussed information and practices to help save society from a possible crisis, at Kyung Hee University System’s Peace BAR Festival.

The second dialogue session of the forum, in recognition of the United Nations’ International Day of Peace, kicked off in Seoul last Friday under the theme of “Are Homo Sapiens Destined to be Trapped in the Myth of Unlimited Growth or Do They Have the Potential to Transform Themselves?”

The session began with an opening speech by Professor Song Jae-ryong from the Department of Sociology at Kyung Hee University. Divided into two parts, Dr. Paul R. Ehrlich, an emeritus chair professor of the department of Biology at Stanford University and author of “The Population Bomb,” first gave a lecture virtually and was joined by Choe Jae-chun, chair professor at Ewha Womans University and co-chair of the country’s Covid-19 Normal Life Recovery Support Committee, as the moderator for the open discussion.

Starting his lecture, Dr. Ehrlich expressed concerns over people talking about going back to normal while the earth is getting through the Covid-19 pandemic.

“People are beginning to talk about going back to normal,” said Ehrlich, “and one of the things that disturbs me greatly and a point that I’d like to make very soundly tonight is that there’s nothing at all normal about 2019 or 2018.”

Ehrlich referred the period as a small part of “the new abnormal.”

“That is a short period of human history that has changed our behavior dramatically, led to great comfort for some people, a few people basically, but has threatened the very existence of civilization and perhaps even the persistence of our species,” he said.

“The agricultural and industrial revolutions changed us physically, but more than that, it changed our culture dramatically,” Ehrlich said. “We dramatically changed our behavior, invented the rat race, people trying perpetually to show off more things than other people.”

Ehrlich pointed out that excessive consumption due to overpopulation caused global problems.

“Politicians think that growth is the cure for everything, but growth, as scientists have repeatedly pointed out, is more the disease,” he said, warning that these threats can end our civilization, if they get bad enough, and can wipe out our species and force us to extinction.

Ehrlich claims a basic change in human culture in general is the solution for these crises that threaten humanity.

"[What's] absolutely critical is changing the view, particularly of our leaders, about population size, […] and growth of consumption," he said.

Choe began the conversation with a question about Ehrlich's book, “The Population Bomb,” asking about the attacks he got and how he responded to the criticism.

“One is, the very idea that there could be such a thing as too many people, went against the general Western culture,” Ehrlich answered.

“Even though we did not promote abortion — and I think contraception is a much better way of dealing with things than abortion, although I think it is absolutely necessary to have access to abortion because contraception is not foolproof — but that was the idea, that if you had too many people, you would need abortion. That was another factor [in the criticism].”

He added, “One of the problems I faced all the time: People said, 'O.K. We have too many people, then who do we get rid of?' And it became a feature of racist commentaries. […] A colleague and I pointed out that you want to get a smaller population gradually, but the idea is not to have more or less of any one kind of person.”

Choe also asked about birth rate, which has become a national issue and a challenge in Korea and many other countries.

“Why is the Korean government trying so hard to increase the birthrate? […] I believe this could be us caught in the growth trap,” he added, and asked for Ehrlich’s take on this issue.

Agreeing with Choe's remark, Ehrlich answered, “Some of the best news in the world is the reduction of the total fertility rate in rich countries,” he explained. “Almost all of our existential threats come from overconsumption based primarily in the rich countries. So if we can get the rich countries’ populations shrinking, […] we [can] look at what is happening globally and help the people in the poor countries.

“Unfortunately, our evolutionary past tends to make us smart but not wise,” Ehrlich said.

The two professors moved on to the topic of the Covid-19 pandemic and its connection to climate change.

Choe introduced a study in science journal "Total Environment," conducted by a research team from Cambridge. According to the research, about 40 species of tropical bats have moved over the last 100 years, because tropical areas have gotten even warmer because of climate change — one such spot being in Southern China, carrying more than 100 coronavirus variants.

“A lot of the biodiversity that we’re losing is the larger elements in systems,” Ehrlich responded. “What then breaks lose is, say, the rodents, but the rodents are wonderful carriers of various bacteria and viruses, so they […] make it much more likely that we’re going to have the zoonoses move into human beings. […] And we’re going to have more and more [Covid variants] as the climate changes.”

“The basic thing we have to do is convince the politicians that we’ve set the system wrong and the new abnormal can’t be solved by just changing one thing — by say, changing to nuclear power only so we don’t put any more carbon into the atmosphere," Ehrlich said.

He continued, “What we have to do is become one great non-governmental organization.

“That is, it’s the future of everybody that’s at stake," he said, stressing the need for education and science to work a lot more with social science, arts and humanities.

Choe agreed that the world needs to fundamentally reform the education system, saying, “Instead of teaching the same thing we've been teaching at schools, we have to really think about how humanity can survive on the planet.”

Due to social distancing guidelines, all sessions during the Peace BAR Festival are held via video conference, which can be streamed live on the website (pbf.khu.ac.kr). The next dialogue session will be held under the theme of “The Arrival of Extraterrestrial Intelligence in the Solar System: Will the Identity and Destiny of Earth be Rewritten?” on Oct. 29.