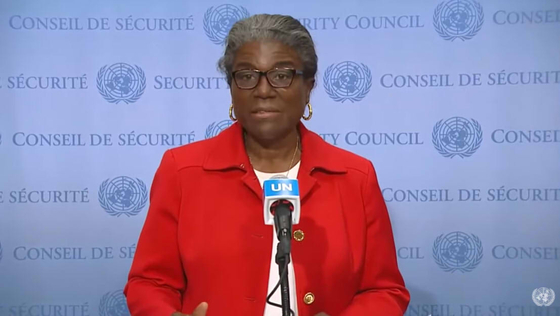 U.S. Ambassador to the United Nations Linda Thomas-Greenfield speaks about North Korea ahead of a meeting of the UN Security Council in New York Wednesday. [UNITED NATIONS SCREEN CAPTURE]

Pyongyang said Thursday there's no need for Washington to "worry or trouble itself" over its submarine-launched ballistic missile (SLBM) launch earlier this week.

"It truly concerns us that the U.S. is showing abnormal reactions," a spokesperson for Pyongyang's Foreign Ministry told the North's official Korean Central News Agency (KCNA), claiming the SLBM launch Tuesday "did not pose any threat or damage to the security of the neighboring countries and the region."

The Foreign Ministry spokesperson said in the English-language report, "The DPRK's deterrent does not aim at a specified state," but is meant to prevent war and defend its sovereign rights. DPRK is the acronym for the North's official name, the Democratic People's Republic of Korea.

The United States and South Korea "have been ruled out as our arch-enemies," he said.

"When doing the recent test-firing we did not have the U.S. in mind," stressed the spokesperson, claiming the launch was part of "normal activities for carrying out the medium- and long-term" defense plans for the country and criticizing Washington for "double standards."

The spokesperson expressed "strong concern" that the United States and the UN Security Council "are tampering with a dangerous 'time bomb.'"

If Washington "does not take issue" with Pyongyang's exercise of sovereign rights, "no tension will be caused on the Korean peninsula," said the spokesperson. If the United States and its allies opt for "a wrong action," he continued, it could "act as a catalyst for more serious consequences."

On Tuesday morning, North Korea fired a short-range SLBM from near the eastern port city of Sinpo, South Hamgyong Province, into the East Sea, said South Korea's Joint Chiefs of Staff (JCS). South Korean military authorities were not immediately able to confirm if the SLBM was launched from a submarine rather than a submersible barge, as in previous tests.

Analysts said the new weapon appeared to be a mini-SLBM first unveiled at a defense exhibition held in Pyongyang last week to mark the founding anniversary of the North's ruling Workers' Party.

On Wednesday, North Korea's state media claimed it had test-fired a "new type" of SLBM the previous day from its "8.24 Yongung" submarine. It claimed that it had previously successfully tested another SLBM from this submarine in 2016.

Ahead of the UN Security Council emergency meeting called by the United States and Britain, three members of the European Union on the Security Council — Ireland, France and Estonia — issued a joint statement urging the North to "end its destabilizing actions."

Geraldine Byrne Nason, Irish ambassador to the United Nations, told reporters in New York that the North's SLBM launch "forms part of a pattern of provocations by the DPRK" in recent weeks, including short-range ballistic missiles, long-range cruise missiles and a hypersonic glider.

She added North Korea must "take concrete steps to abandon its ballistic missile, other WMD [weapons of mass destruction], and nuclear programs in a complete, verifiable and irreversible manner."

U.S. Ambassador to the UN Linda Thomas-Greenfield also urged North Korea to stop its "reckless provocations," speaking separately to reporters ahead of the meeting, but stressed Washington remains committed to "serious and sustained diplomacy."

"The United States and many other council members have condemned the launch, which violated multiple Security Council resolutions," she said, describing the recent missiles launches as "unlawful activities" and "unacceptable."

She urged member states to "fulfill their sanctions obligations under existing Security Council resolutions," to prevent the North from accessing funds, technology and knowhow needed to develop its WMD and ballistic missile programs. She called for stricter implementations of sanctions on the North, saying the UN 1718 Sanctions Committee "is not doing its job."

"Each new advancement of the DPRK's weapons of mass destruction and ballistic missile programs destabilizes the region and threatens international peace and security," said Thomas-Greenfield, urging North Korea to "refrain from further provocations and engage in sustained and substantive dialogues."

She continued, "Our position remains clear: the DPRK must abide by the Security Council resolutions and it is time to engage in sustained and substantive dialogue toward the goal of complete denuclearization of the Korean Peninsula."

When asked about the United States' resolve for negotiations following the North's latest missile launch, Jen Psaki, White House spokesperson, told reporters on board Air Force One Wednesday, "We've stated our openness to having discussions with North Korea for months now."

South Korean Defense Minister Suh Wook said that Seoul's military is conducting a close analysis of the North's latest SLBM but assessed that it appears to be in the "early stages" of development.

Speaking at a parliamentary audit session Thursday, Suh said that he believes that interception of the North's SLBM is possible at the current stage.

North Korea appears to be making a lot of efforts in developing its SLBM program, as seen in its showcasing of three SLBMs at the defense exhibition last week, Suh pointed out. He added that SLBMs can't be analyzed from just one launch and that there are various factors to consider, such as the stability of the launch platform after the launch.