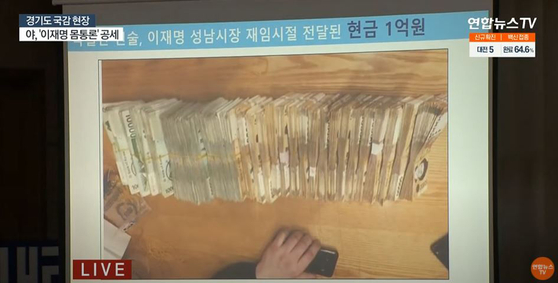 A pile of cash worth 100 million won ($85,000) allegedly delivered to Gyeonggi Gov. Lee Jae-myung, then Seongnam mayor and now the presidential candidate of the ruling Democratic Party. [YONHAP]

The author is a national team reporter of the JoongAng Ilbo.

The boot-shaped Italian Peninsula has a big island at the tip of its toes. Sicily, with an area of 25,711 square kilometers, is 14 times the size of Jeju Island and the biggest island in the Mediterranean. Its specialty products include pistachios, lemons, olives and grapes. However, many people are reminded of something else from Sicily, the Mafia, the international crime syndicated that has spread out from this island.

The Mafia is strictly family-oriented. It has a centralized power structure of a pyramid with the godfather at the top. Movies like “The Godfather” show how these organizations operate as a family business. The godfather would want to have his son or relative to succeed him, and the members of the organizations form a brotherhood, even if they are not related by blood. Based on this tight organizational structure, the Mafia is known to have strong connections in politics and business.

Recently, suspicions were raised that Gyeonggi Governor and ruling Democratic Party (DP) presidential candidate Lee Jae-myung was involved in a gangster organization. The name of the organization is “Gukje Mafia,” based in Seongnam. Does the name contain the desire to start from the local area and influence politics and business like the Mafia?

The opposition People Power Party (PPP) lawmaker Kim Yong-pan claimed at a parliamentary audit of Gyeonggi on Oct. 18 that money from the Gukje Mafia was delivered to Lee, showing a picture of the cash.

The next day, the ruling and opposition parties argued about the issue at the audit on the city of Seoul. Rep. Kim of the PPP raised his voice and said, “You cannot cover the sky with your palm. The substance is clear.” His remarks suggest that he has reliable data. But the DP defined it as political maneuvering. Gov. Lee demanded Kim apologize and resign. DP lawmakers joined forces to demand Kim resign from his post on the National Assembly Pubic Administration and Security Committee.

At this point, it is not something to be covered up and let go. The facts should be found. Do dark deals between politicians and the mafia really exist? Or was the PPP played by a former mobster and a provocative photo?