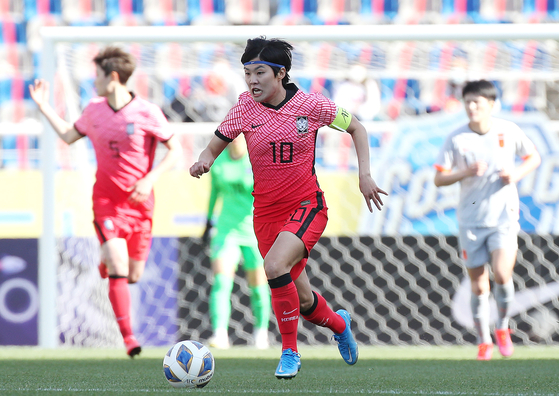 Ji So-yun plays the ball in the first leg of a Tokyo Olympics qualifier against China at Goyang Stadium in Goyang, Gyeonggi on April 8th. [NEWS1]


The women's national football team will play the first of two friendlies against the United States on Thursday at Children's Mercy Park in Kansas City, or at 9 a.m. on Friday in Korea.

The second friendly is scheduled to take place next Tuesday at Allianz Field in St. Paul, Minnesota.

The most recent friendly between Korea and United States was in October of 2019 in Chicago, when Chelsea star and national team captain Ji So-yun scored the equalizer.

Ji is Korea’s all-time leading scorer with 59 goals in 127 international appearances and also the first Korean to play the FA Women’s Super League. Ji is joined by Cho So-hyun of Tottenham Hotspur and Lee Geum-min of Brighton & Hove Albion in Europe.

Even with the three big names, the friendlies against the No. 1 team are not going to be easy but will serve as a useful assessment before Korea play the 2022 Asian Football Confederation Women's Asian Cup in India next January, where the Taeguk Ladies will be looking to earn their third Women's World Cup ticket.

In Korea’s match against Mongolia, Ji scored her 59th goal to become Korea’s all-time leading goal scorer across all teams, all divisions, all genders and all competitions with Cho and Lee each adding two goals in the same match.

“I think that this match is a great chance to assess where our team stands,” Cho said ahead of the match. “I learned how to play against stronger players in Europe and I think I was able to grow as a footballer. I want to play in a way that makes the match difficult for the opponent. We practiced sprinting and playing under pressure with our head coach Colin Bell. We will play a good match.”

“This time will be different,” said Lee. “I am not who I was back then. I do not think that our team members lack in skill compared to the opponent. I will enter the field not as an underdog but as the same football player.”