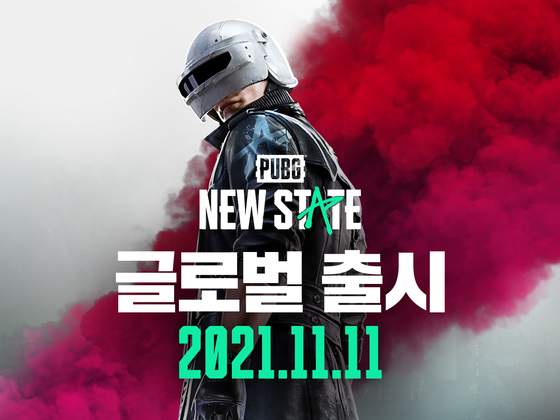 An image advertising Krafton's PUBG: New State, which will launch on Nov. 11 [KRAFTON]

The game developer held an online launch event for the successor to its global megahit PlayerUnknown’s Battlegrounds (PUBG), on Thursday. Krafton is hoping the new game will help it avoid being a one-hit wonder.

The game’s release had been expected this year, but without a confirmed launch date. While the launch will go ahead in some 200 countries and 17 different languages, China and Vietnam will be excluded. When those countries will get the game was not revealed.

PUBG: New State is in the same "universe," as entertainment franchise creators like to say, as PUBG. But the new game is set in 2051, compared to the present.

The cars, guns and many other things are futuristic.

Within certain areas of the game map, the electric cars of the future run out of power when they hit magnetic fields. New game rules have been applied as well, such as a rule called the “green flare gun,” which helps revive a dead player. A “recruit system” helps a player poach a member from the opposite team.

Krafton said the game has been technologically improved to offer more stable game playing for users even on old mobile phones, like iPhone 6Ss.

According to Krafton, over 50 million people globally have signed up to play the game ahead of its launch.

The company will run technical tests of the game on Oct. 29 in 28 countries to check its stability a final time.