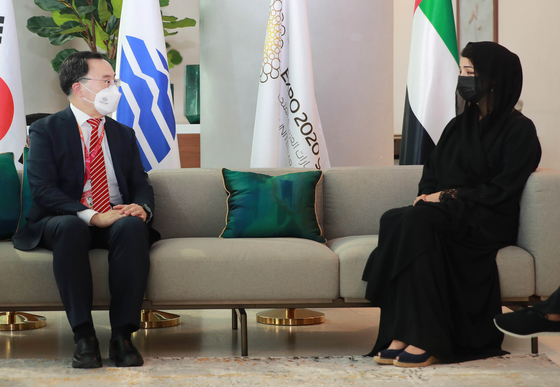 
DUBAI — Korea’s campaign for Busan to host the 2030 World Expo was in full swing in Dubai.

“Busan is planning to host the World Expo in 2030,” Korean Trade, Industry and Energy Minister Moon Sung-wook said during a meeting with Reem bint Ibrahim Al Hashimy, director-general of Expo 2020 Dubai on Saturday.

Moon praised the successful hosting of this year’s expo despite the global event being pushed back a year due to Covid-19 outbreak, and he asked the organizing committee to share its experience and ideas.

Hashimy said Korea and the United Arab Emirates (UAE) have built a strong partnership and hopes that through the current World Expo, cooperation between the two countries will further expand.

UAE is the first and only foreign country in which a Korean nuclear power plant is operating.

Moon also spoke with Ausrine Armonaite, Lithuania’s minister of the economy and innovation.

“This year marks the 30th anniversary of Korea opening trade with the three Baltic countries — Lithuania, Estonia and Latvia,” Moon said. “Lithuania is celebrating the 30-year relationship by opening its first embassy in Korea this year.”

Moscow, Rome and Odesa, Ukraine have also expressed interest in hosting the World Expo in 2030.

Two thirds of 169 member states of the Bureau International des Expositions must agree on the site. The vote is to take place in December 2023.

Yeosu sought to host the event in 2010, but it lost to Shanghai.

If Busan wins the bid, Korea would be the seventh country to have hosted the world’s three major events — the Expo, the Olympics and the World Cup.

The next World Expo will be held in Osaka in 2025.

The Korea Institute for Industrial Economics and Trade estimates that a Busan World Expo would boost the Korean economy by 61-trillion-won and add 500,000 jobs. 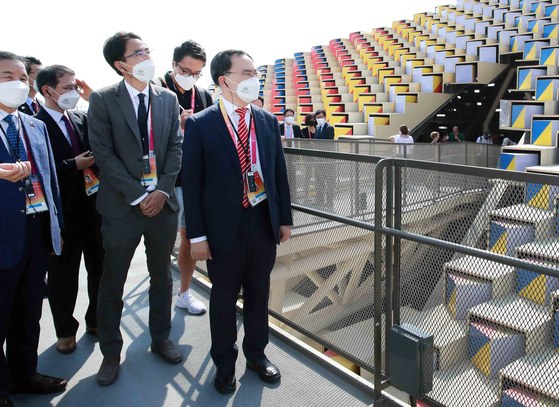 Moon Sung-wook, minister of trade, industry and energy, tours the Korean Pavilion at the Expo 2020 Dubai on Saturday. [MINISTRY OF TRADE, INDUSTRY AND ENERGY]