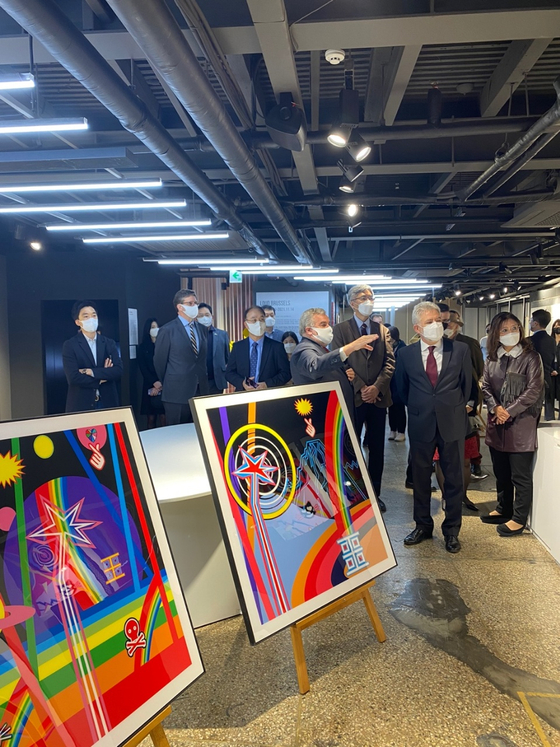 Belgian Ambassador to Korea Francois Bontemps, second from right, and President of Ghent University Global Campus Han Tae-jun, third from right, view the art exhibition at KOTE, central Seoul, on Thursday, organized by the embassy for the Belgian culture festival to commemorate the 120 years of Korea-Belgium ties. [EMBASSY OF BELGIUM IN KOREA]

A festival to showcase Belgian waffles, cocoa and beer, as well as some of its contemporary art and music took center stage in Incheon and Seoul from Thursday to Sunday to commemorate 120 years of diplomatic ties between Belgium and Korea.

“Belgian cuisine and its dining culture may not be the most well-known abroad, and that is because a lot of the heritage involved with dining and food in Belgium is handed down from family to family,” said Sang Hoon Degeimbre, chef and owner of L’Air Du Temps, a two-starred Michelin restaurant in Belgium.

Degeimbre utilized Korean ingredients to make Belgian dishes at KOTE, a cultural complex in Insa-dong, central Seoul, from Thursday to Sunday. Belgian hot chocolate by Pierre Marcolini and a selection of Belgian beers were also available.

Due to the Covid-19 situation, the event was held with limited number of guests, with social distancing measures in place. 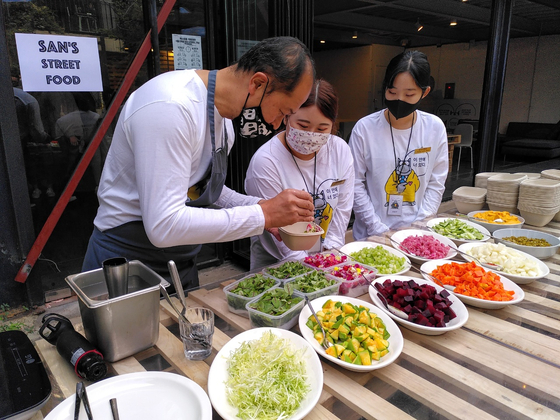 Sang Hoon Degeimbre, chef and owner of L’Air Du Temps, prepares dishes at the Belgian culture festival in Seoul on Thursday. [EMBASSY OF BELGIUM IN KOREA]


Visitors to KOTE were also greeted with an exhibition of artwork by Brussels-based artists, including Bert De Keyser, Benoit + Bo, Carole Solvay, Hans Op de Beeck, Denis Meyers, and Philippe Geluck. The exhibition is open at the complex through Nov. 14.

As part of the cultural festival, a photo exhibition dedicated to the Belgian soldiers who fought in the Korean War (1950-53) was held at the Ghent University Global Campus (GUGC) in Songdo, Incheon, on Friday, along with a concert showcasing classical and contemporary music involving artists, including the Korea Coast Guard orchestra and singers Vincent Blue and Alee and rapper BeWhy.

“Relations and connections are what makes us human,” said François Bontemps, ambassador of Belgium to Korea, at GUGC on Friday. “In this time of corona, relationships are more difficult but all the more precious. We are fortunate to be here together tonight to celebrate the 120 years of our relations between Belgium and Korea.”

The GUGC is the global campus of Ghent University of Belgium. It was established in Songdo in 2014.

To celebrate the anniversary of diplomatic ties, the embassy and GUGC also organized Young Scientist Challenge, a contest for high school students in Korea on how they can best reach sustainable development goals through solutions from Sept. 1 to Oct. 23.

On Nov. 26, the two institutes will be hosting a symposium on preservation and use of marine resources for climate action.

“In our 120 years of friendship, Korea and Belgium have come so far to be able to share ideas and work together in science and technology,” said Han Tae-jun, president of GUGC. “I am certain that the two countries have competitive edges in this field that are complementary and can create positive synergies in years to come.”