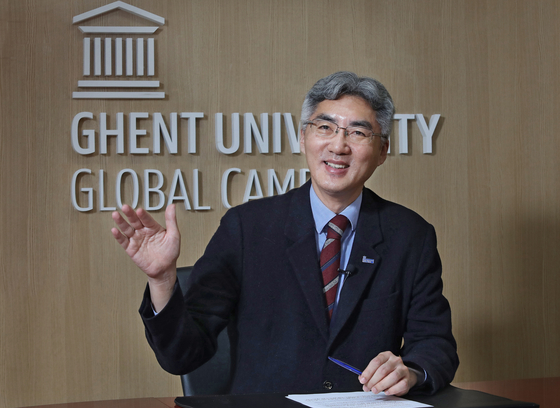 “Dare to think,” the motto of the Ghent University of Belgium, is not a calling just for its students, said Han Tae-jun, president of Ghent University Global Campus (GUGC) in Songdo, Incheon.

“In essence, we are daring each other to think against the ordinary, and this applies to the faculty members as well,” he said. “For one, we are hosting later this month a symposium on how we can better use our marine resources such as mudflats, something that is rather overlooked by policymakers when it comes to reducing greenhouse gas emissions, even though there is real scientific evidence that mudflats can absorb a startling amount of carbon dioxide in the air annually.”

Incheon, the city where the Belgian university opened its global campus seven years ago, is home to nearly 30 percent of Korea’s tidal flats, or gaetbol, which were added to the Unesco World Heritage list in July.

The symposium, to be hosted by the university on Nov. 26, will pose some daring questions and present ideas on how best to use the gaetbols for climate action, including cooperation with North Korea, to utilize its untouched gaetbols.

“This year, we will be joined by scientists from Pyongyang, and we are looking forward to discussing a number of two-Korea solutions on green energy transformation, such as joint research on our gaetbols,” Han said. “When it comes to posing solutions to address climate change, the pandemic and other environmental crises of this age, we all have to dare to think, but dare to think based on scientific evidence. We hope that the conference will epitomize the bilateral cooperation on science and technology, as well as on education and learning.”

The symposium is one of the events organized with the Belgian Embassy in Seoul to commemorate the 120th anniversary of Belgium-Korean ties. The GUGC is the first and only global campus of a Belgian university established in Korea.

To hear more about the GUGC’s latest developments and Belgian-Korean cooperation on higher education, the Korea JoongAng Daily sat down with Han on campus. The following are edited excerpts from the interview. 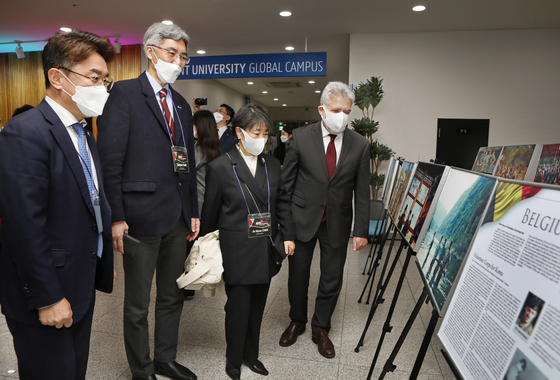 From right, Francois Bontemps, ambassador of Belgium to Korea; his wife; Han Tae-jun, president of Ghent University Global Campus; and Kim Hee-cheol, member of the Incheon city council, attend the photo exhibition dedicated to Belgian participation in the Korean War (1950-53) at the university campus in Incheon on Friday. [PARK SANG-MOON]

The GUGC is a unique example in Korea in that it is the only university campus in the country being run by a Belgian university, or any university in Europe for that matter. What kinds of experiences would students and faculty have at the GUGC that are characteristically Belgian?
One standard that sets the GUGC apart from other science and engineering programs of universities in Korea is the importance we place on laboratory studies. I have heard time and again from executives at Samsung Biologics, Celltrion and others in the field how important it is for the students to graduate with enough experience experimenting in the lab. Science is not all about theory – you have to experience it to understand how it really works. At GUGC, we make sure that students get as many hours in the lab as they do in learning theory, just as science and engineering programs at many university programs in Europe do.


One of the perks of being a GUGC student must be the regular exchanges with the Ghent University in Belgium. Has the university found ways to continue the exchanges despite the pandemic?
A number of Ghent University professors fly in from Belgium to Korea every semester and stay on GUGC for a month to teach the students. These exchanges, of course, have been restricted since the onset of the pandemic, but we are hoping to maintain them at the moment through the online platform. The GUGC students also spend their first semester in their senior year at the Ghent University in Belgium, and we currently have a number of GUGC graduates who are pursuing their master’s degrees at Ghent.


As part of the 120th anniversary of diplomatic ties between Belgium and Korea, we understand that the GUGC is hosting with its Belgian partners a symposium on international marine cooperation. Can you tell us more?
The symposium will be hosted on Nov. 26 and will be joined by representatives and researchers from over 20 countries, including North Korea. We will be discussing how we can preserve our marine ecology together, as well as ways to reach our net-zero goals through the use of our gaetbol.


Do you mean that the two Koreas could be discussing cooperation on using their gaetbols to reduce carbon emissions?
Yes, we’re even been thinking about proposing the listing of North’s Hwanghae Gaetbol and the South’s Ganghwa Gaetbol on Unesco World Heritage List together. You see, Korea’s gaetbols were listed earlier this year, but that didn’t include the gaetbols of Incheon, including the Ganghwa Gaetbol, which probably makes up some 30 percent of all gaetbols of [South] Korea.

The two Koreas are not unique in the world in terms of sharing tidal flats – the Wadden Sea’s tidal flats are being shared by the Netherlands, Germany and Denmark, and these countries have been cooperating on preserving them together. I think that something similar could be done by the two Koreas and China to preserve the tidal flats on our coastal areas together, and conduct joint research on how they can contribute to lowering carbon emissions.


Can you tell us more on why the gaetbols are instrumental in climate action?
Research has shown that that proper use of tidal flats in Korea could lead to a reduction of as much as 30 percent of the current level of greenhouse gas emissions. I think the gaetbols pose a very realistic solution for Korea as it tries to reach its net-zero goals. A country cannot turn from one energy source to another completely overnight. But it appears that sometimes that is what the government expects to do when it comes to green energy transformation. We cannot shut down coal-fired plants overnight – but we can find alternative ways to generate energy and grow them gradually, whilst keeping all options on the table.

Wind energy and solar energy have been the buzzwords amongst some policymakers in Korea, but Korea is, at least for now, not at a level that it can rely completely on solar and wind energy. I hope that the upcoming symposium will pose a realistic picture for the government on how it can count on tidal flats to help turn the tide on its green energy transformation.


Perhaps that initiative fits well with Ghent University’s motto, “Dare to think.” How would you say the motto is being lived out by GUGC students?
This is my personal opinion, but our secondary education in Korea is ill equipped to help students to “dare to think.” From very young age, students in Korea are expected to spend very long hours in private cram schools to prepare for the one exam of their lifetime, the college entrance exam, and they don’t quite get that freedom to think and imagine on their own. This curbs a very important skillset for the students – their creativity.

At GUGC, we believe in accepting all students who have the willpower and creativity to dare to think, and that is why we conduct our admissions test several times a year, to give as many students a chance, and our requirements are quite simple: have a passing grade in these tests. But once in, the students are faced with a rigorous curriculum and graduation requirements that prepares them for the professional life outside of the classrooms.


If you have any personal goals for GUGC during your tenure, what might they be?
Only that the example that we set at the GUGC in terms of our research, academic rigor and social contribution creates a significant movement in Korean education, to encourage all of us in the sector to strive together for a higher goal, that in the long run we will be contributing to heightening the standards of research in science and technology in Korea. The GUGC symbolizes the cooperation between Belgium and Korea on education, and we hope that our continued cooperation will lead to win-win results for both countries for the many years to come.